Some new Warriors of Chaos Additions....

Been awhile since I updated my Warriors of Chaos army.  I needed a break from building Vikings, so I thought I would assemble some new warriors.  At Adepticon Alex Akers gave me some of the new Battle Road Games' heads sculpted by Navvarro over at the Mr. Bug Man blog.  So on the left I used one of those heads on the GW Warrior Champion model.  I'm planning to add just a scraggly bit of hair to the head, but it does have this cool mutated look to it that I'm after. 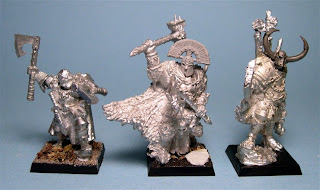 Then I picked up another Avatars of War lord, been so long that I worked on this army that I forgot I had one already, so to make it look different I added a MaxMini Black Lotus head, that matches my one unit of Chaos Knights.  And then again at Adepticon I picked up an Enigma Morphus model.  After looking at the Enigma model I decided it needed a head swap, dug through a bits box and found a spare head.  Then I decided it needed a skull on one of the post-like back banner things, so I used a Secret Weapons skull bit for that.  I find it funny looking at the size of all three of these models, I think everyone is beginning to exceed what can be done on 25mm bases.

I have a bunch of warriors and marauders prime coated and ready for paint.  Plan to paint some of them soon inbetween painting countless Vikings.  Speaking of which I'm building the banner men currently along with another unit.  As I was looking for standards I remembered some nice ones in the Fire Forge kit, which got me into building some of their knights.  So I have a little bit of GS work to do on the standards and to finish off the skirmishers and a few other Vikings, so while I do that I will build the Khorne beastman for the Crossover project with the Lost In the Warp blog, in which I believe James managed to convince the Butcher's Bill in joining up in the creation process of a Nurgle Beastman.

So lots going on, its not just all racing this summer, although I am doing a lot of that, next up me driving a Vintage Go-Kart that is as old as I am.  And yes people were shorter back then, and I'm not all that tall.  The Vintage Bug kart has a rather cramping affect on a person.....

Posted by PsychosisPC at 9:17 AM