I know PPC you have lost your damned mind. Last post a Bretonnian and now a 54mm Viking. 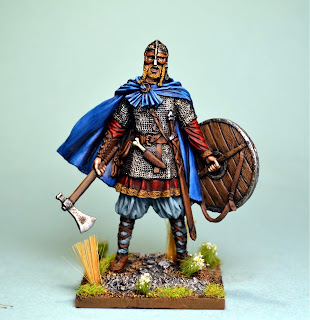 Yea I know.  I saw this miniature on Ebay and had to have him.  Not a bad pose, pretty decent metal casting, came from Russia.  This is the first time that I believe I've painted a 54mm miniature as well. 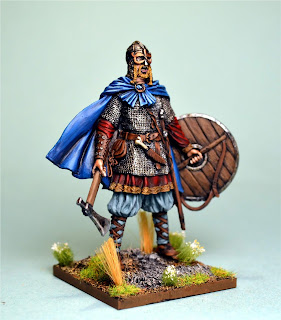 It does present some issues with blending and highlighting.  Things you can get away with at 28mm look not really very good on 54mm. 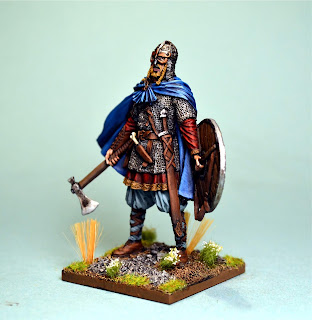 I had to blend more and highlight more.  The basing is the same as my 28mm models.  I do plan to use this miniature as a giant with my 28mm Vikings in Dragon Rampant. 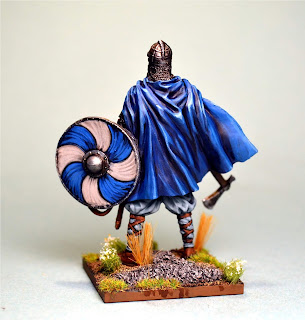 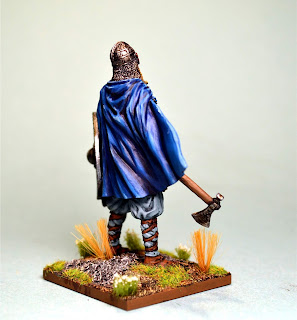 I think the cape turned out really well.  I may do some more of these big Vikings. 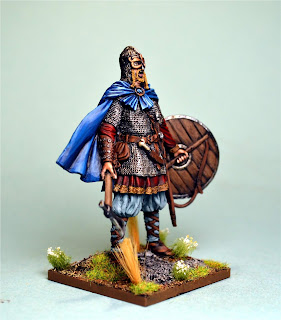 Posted by PsychosisPC at 6:56 PM 2 comments: 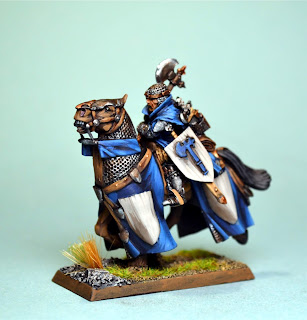 Yea you are probably like PPC, that's not a Viking or a Roman or Chaos...what the heck are you doing.  Well I once had a dream....well I have lots of dreams and nighmares...so let's not go there. 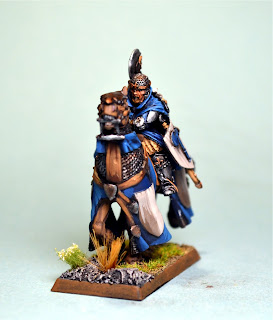 At one time, I wanted to build a Bretonian army.  I accumulated a bunch of pieces for the models, then the newer models came, then the demise of Warhammer came about....then I decided to dump all that I accumulated on Ebay.  Or at least I thought I had dumped everything. 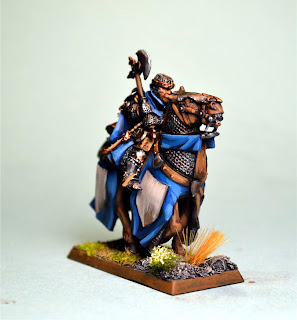 I found this guy in the bitz box, so I threw him together and painted him up. 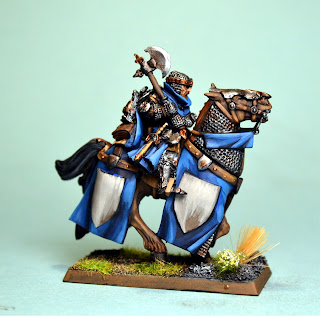 I might keep him around for the occasional RPG/Frostgrave game. 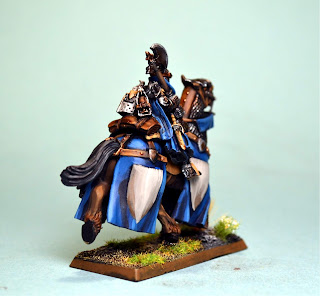 I think he turned out alright. 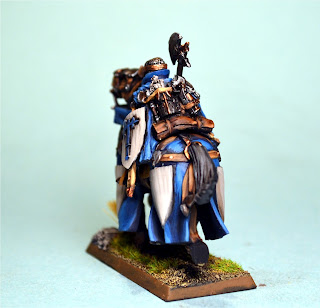 As always....well, no.  There will not ever be anymore Bretonnians from me.
Posted by PsychosisPC at 5:46 PM 4 comments:

My crusades stuff has not gotten much love lately, but I do have new models for it as well. 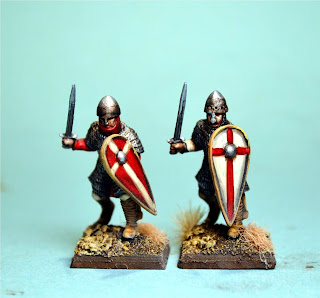 They are Conquest Miniatures.  I did have a bit of a hard time remembering some of my Holy Land blue paint scheme, but I think I found it. 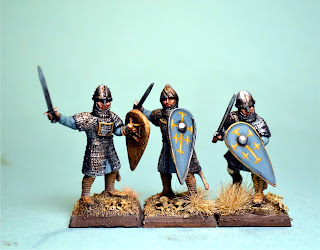 A Viking by Saxon and Saxon 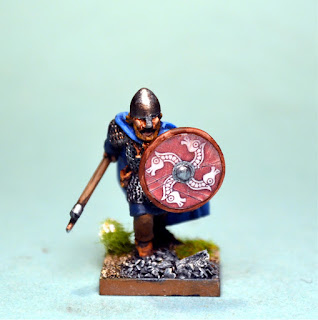 Yep.  A Viking warlord by Saxon Miniatures now Warlord Games.  Fun pose on this one.  I did not like Colin's hand on this one though, so I chopped it off and put a Gripping Beast Plastics hand on it instead. 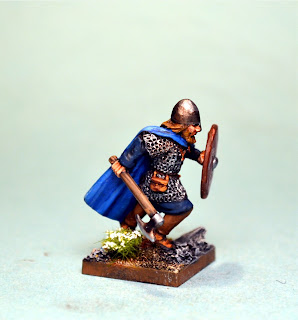 This is a close up of one of my Gripping Beast Saxons.  I do like the heads on these miniatures. 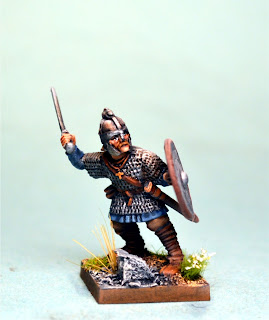 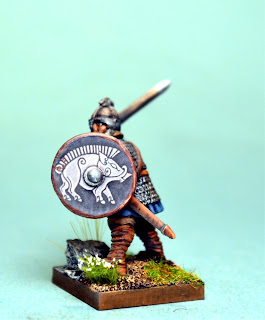 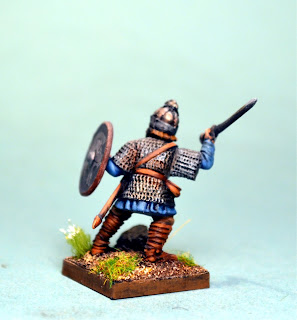 My standard blues and leather. 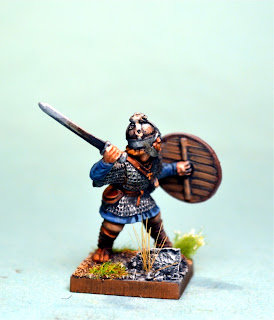 Posted by PsychosisPC at 5:29 PM 2 comments:

Back when I played lots of WAB, I needed more of these guys.  I'm planning on playing more WAB, so now I have lots of these guys for WAB or whatever. 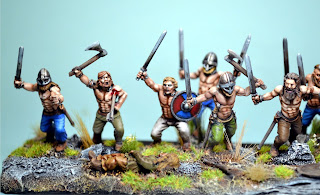 They are pretty much all Warlord Games Barbarians converted with Gripping Beasts heads. 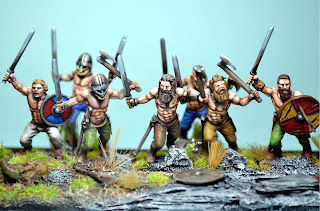 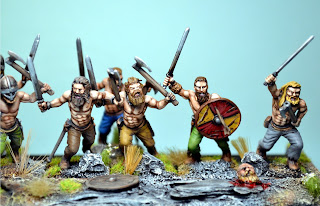 A sharp eye will recognize the large decapitated head is from one of my Saxon Miniatures' conversions that I showed a few posts ago.  Don't let bits like that go to waste. 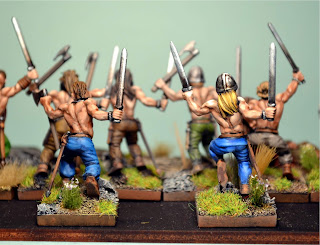 Fleshtones are all Reaper Master Series paints.
Posted by PsychosisPC at 6:17 PM 2 comments: 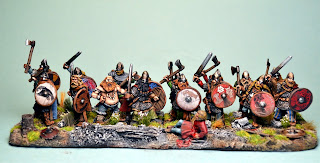 Yep this the second unit full of character.  Gotta love those Foundry minis. 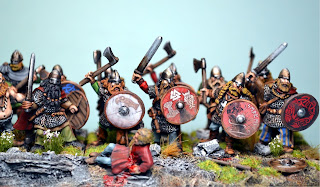 The guy in the center of this unit next to the fat shirtless guy is simply awesome.  I love his pose and that beard is incredible. 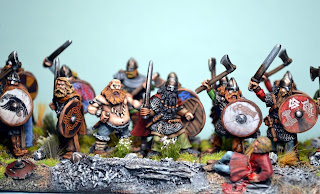 The fat guy is not bad either. 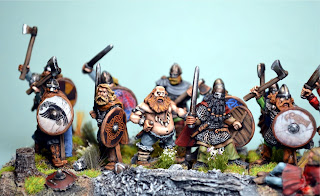 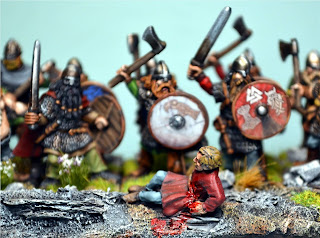 A bit of close up the eyecandy on the movement tray, and a view of the backside of the unit.  We are

nearing the end of this wave of Vikings, then I'm moving on to the rebuild of my Romans.
Posted by PsychosisPC at 5:04 PM 6 comments: