I'm in a semi-blorcing mood churning out a few things. A standardbearer, couple rank and file and I'm planning to use the old musician, because I like him better than the new ones. Note the one is using a new 40k Nob head, those are cool for variety. 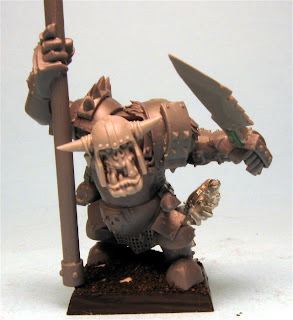 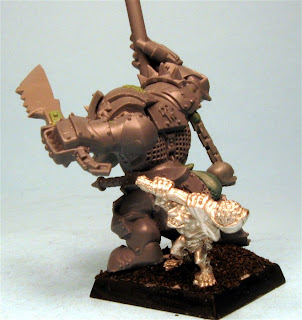 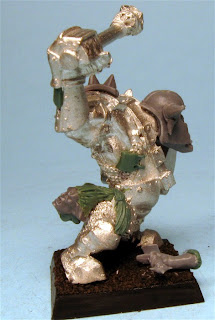 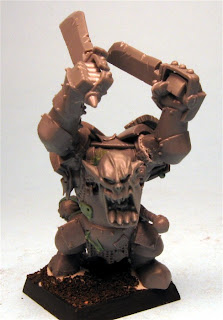 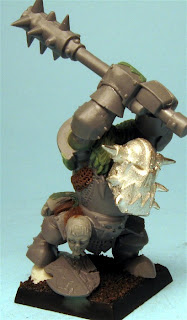 Posted by PsychosisPC at 9:57 AM No comments:

Well messing around a bit more with some Nurgle. I like how this figure turned out. The chaos mutated power fist gives a very cool look to the figure. The base was just something that I was playing around with. Made out of apoxie sculp. 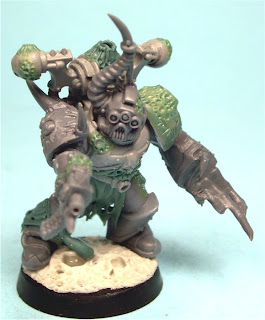 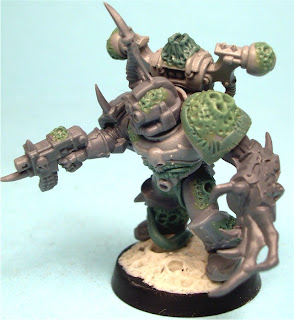 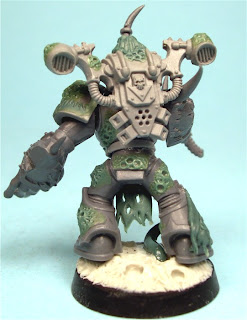 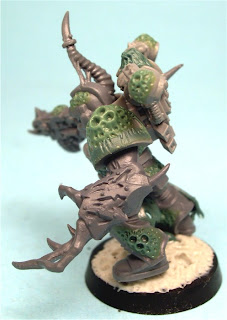 Here is the next Black Orc, this one will be stationed next to Grimgor in the unit. I want each of the orcs to have a slightly different look, all pretty much individuals, so a variety of things are going on with all of them. A bit more carnage with this guy. 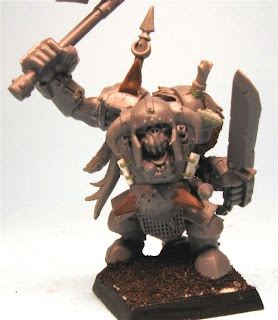 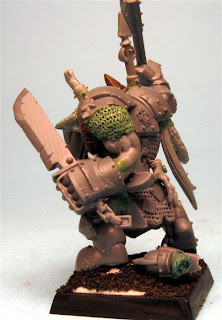 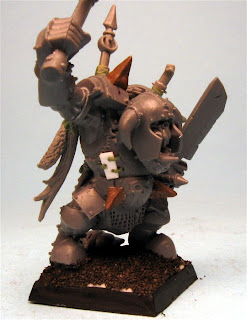 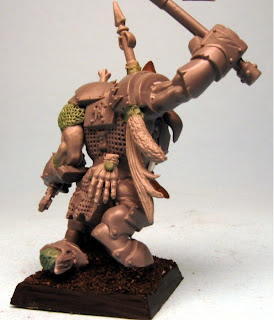 And I just got word that the Slayer Sword at Baltimore Gamesday went to Dylan Gauker. That is very awesome indeed, I know the young guy from some of the tournaments that I have played in the Chicago area. He's very talented.
Posted by PsychosisPC at 9:28 AM No comments:

Continuing the theme of Black Orcs headed by Grimgor. I have tons of those Ogre spiky fists what-chama-call-its laying in my bits boxes for years. For the larger orcs like the black orcs and new 40k Nobs the scales are just about right on the hands. So I thought I would use one here. This guy will be placed on the far left side of the unit, sort of defending the flank. To carry out the theme with the ogre weapon in the left hand, I decided to give him a number of spikes in brown stuff. The brownstuff is like the greenstuff except it cures harder and is not as flexible. Consequently you can shave it and sharpen up the edges a little easier than the greenstuff. Then I also sculpted the skull glyph and fur on the model also. 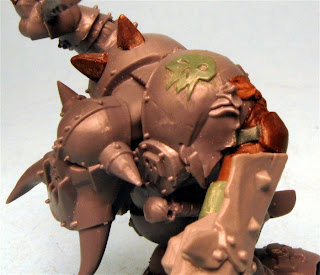 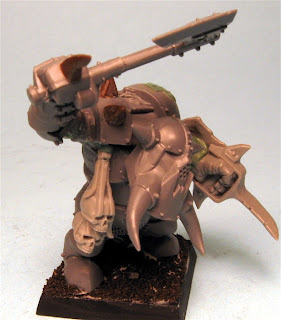 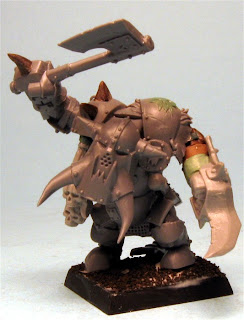 I also liked the idea of hanging some skulls off his shoulder for trophies. A slightly hidden Empire shield in the back continues some of the dead human carnage. More to come of the blorc unit....
And some more Favre thoughts.....Oh and did anyone think that Brett Favre would want to attend Vikings OTA’s or mini-camp. From what I had seen Childress wanted him to attend those things and they are occurring towards the end of the month. Come on, he doesn’t want to do that, he is a diva, and all Packer fans know this from the years of having to watch the narcissist acts that he has performed on an annual basis in Green Bay. Expect him to sign after those are done in the first part of June or at the end of the mini-camp, and make everyone in Viqueen land crazy, about time someone else shares in our grief over the ultimate manipulator. If he does sign with the Viqueens, the Packer management ought to immediately assign the number 4 to one of the punters trying out on the roster.
Posted by PsychosisPC at 11:19 AM No comments:

Last night I started a new project as I build a unit of Black Orcs to team with Grimgor at the head. Here is one of them. I’m using one of the 40k Nob heads, that gives him a particular vicious look. Added a “Wicked/evil” glyph riveted to his gut plate. There’ll be a number of dead empire, bretonians, and other humans through the unit. 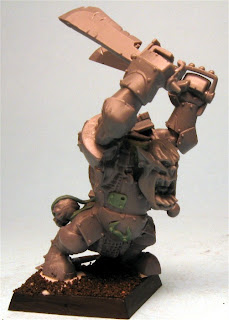 And I did a bit more work on the TNA Nob. Thought about the whole flaming heads glyph and thought it would be cool to incorporate that on the ork head. These pictures show him on the ultra cool resin base created by Dragonforge. This is my first time of working with his bases and they are very good. And for a bit more detail, what better than a decapitated Tau. Hate those little bastards. 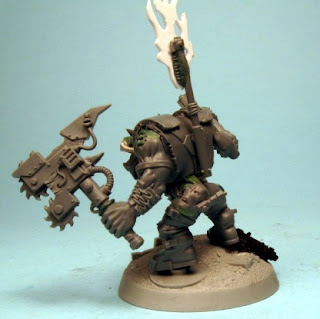 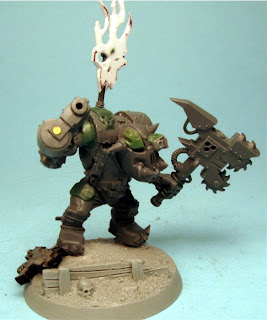 And for something different, I normally do not often show WIP’s of things that I paint. This Avatars of War dwarf is something I started a month ago and stopped. One day I will get back to model and finish it. Anyone that knows me knows that I really don’t like dwarves and I especially hate elves, so its really hard for me to get motivated to paint something like this. That may be why that goblin head actually turned out pretty cool. So far. For a dwarf this is a very cool sculpt, very smooth. 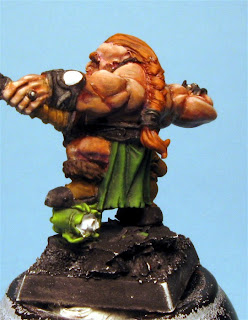 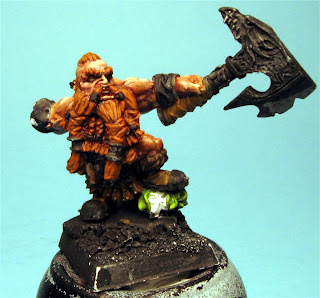 Next time probably some more Black Orcs and maybe some more on Bret Favre.
Posted by PsychosisPC at 8:51 PM No comments:

Taking a bit of break from Fantasy for 40k ...& Chelios

I've always enjoyed the 40k models and fluff, just not really the game itself. Lately, I've taken a bit of break from working on Fantasy Armies to refresh and do some different things. The TNA ork Nob, kind of refreshed me abit. I have a ton of pieces sitting on or around my desk, so I just began finishing a bunch of them for fun. Most will probably end up on Ebay for really cheap fun for someone else to paint. Alot of them are just experiments.

I really did not like these chaos knights heads, but as Chaos Space Marines they are quite creepy looking, which gives that cool evil look. The first is just your run of the mill conversion which will be on Ebay soon, links can be found to my Ebay account over at my Forum. 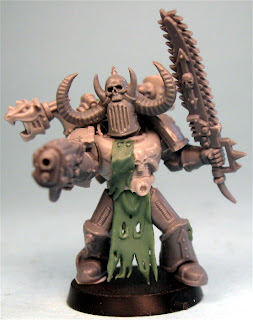 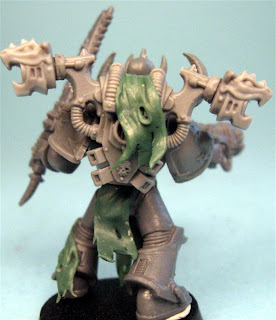 And then here is his brother: 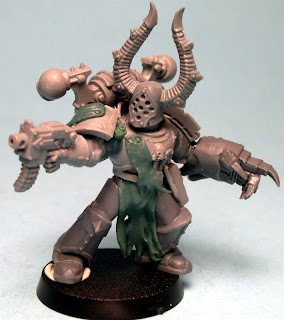 Then some left overs from a Space Wolves army that I never finished, that had a whole lot of barbarian type marine conversions in it. These two guys are up for sale on my forum by the way. 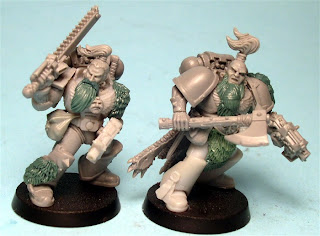 More 40k stuff to follow soon, and maybe some WIP shots of some of my Black Orcs.

And wow what a game I'm watching as I'm doing this between Detroit and Anaheim. I'm a huge hockey fan, love the Red Wings and Badgers. This game has had a ton of action lots of goals early, then everything tightened up a bit, going into triple OT. Great to see Chelios still playing at 47, as well as former USHL Green Bay player Ryan Carter for Anaheim. And it's just ended damn dirty ducks just won. Great game though.

Shawn
Posted by PsychosisPC at 5:13 PM No comments: