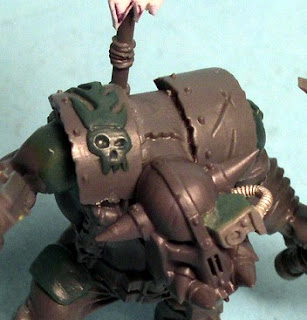 What a weekend. Got a bunch of work done on stuff that needs to be done for this summer. Also watched a fair amount of the NFL Draft and Talledega Races. BJ Raji is going to be an absolute beast for the Packers D-Line, and how about that Ted-haters, he trades back into the first round to get Clay Mathews outside linebacker, great picks. Then Matt Kenseth ends up on his roof in the Nationwide Race, and his teammate Carl Edwards nearly ends up in the stands in the Cup Race, spectacular finishes in both races. Anyway here are a few of the things I’m working, a plastic Nob. I have not done anything in 40k for awhile, and no I’m not going back to playing 40k anytime soon, just the opposite in fact. I’m going to get into Warhammer Ancients and maybe Field of Glory, playing historicals, but that is for another time. This Nob is for a special project that the Team North America guys are doing in a challenge and for auction. I’m sure some of you have already seen Dave Taylor’s Nob in paint, this is mine in WIP form. 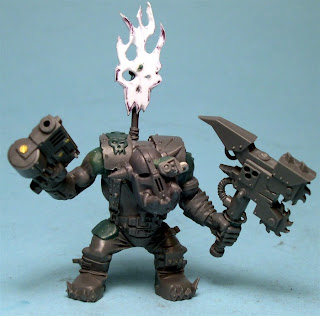 Then there is this guy, that may end up being one of my entries for Gamesday Chicago. Not digging the head, but Mike “King of Nurgle” Butcher had the solution and set me a care package to fix the head problem in the form of GW Nurglings.

And while on the topic of Gamesday Chicago, we, meaning Team North America, will once again be giving free seminars on various hobby things. So if you want to improve your skills, feel free to sit in on our seminars. Or if you want to meet myself and the others visit the Demon Lounge where we will be available to chat with and you may even be able to ask questions of us. More on that later also, as everything still is the development stages, if all goes well I and Mike Butcher will be doing a seminar on building/converting/painting armies.
Posted by PsychosisPC at 8:04 PM No comments: 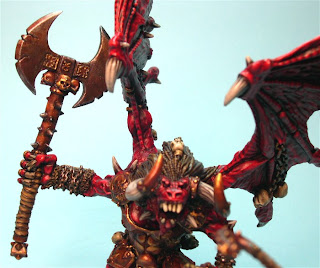 I will be diving into to the Blogpool soon. Prepare yourselves.

Posted by PsychosisPC at 12:04 PM No comments: