I have a few of these Max-Mini heads left over and plan to use them with one more batch of knights that I will do up in the future.  They are very cool looking heads.  So I thought I would try one on the bestigor body. 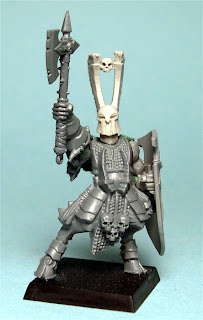 I think it works nicely.  I blended in the chaos warrior arm fur with some GS sculpted fur. 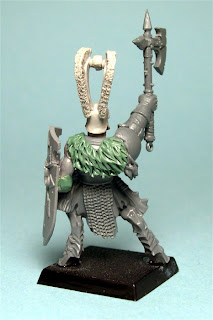 I also got around to putting together my Khorne Lord on a juggernaut.  What a huge piece of metal.  I look forward to painting this in my warrior paint scheme of blue and burnt orange. 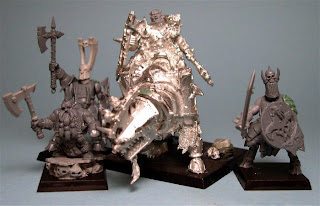 A few more things in the works, finishing up the last Viking unit.  Getting ready to switch gears and paint some.  Also built a bit of terrain this weekend that I might show pics of also.  Much more to follow as always, and then back to the race track on Friday night, will be making changes to the kart probably Tuesday night in preparation for that.  I should probably take some pics of the kart, show some of the scarring that has taken place over the season.
Posted by PsychosisPC at 8:58 PM 3 comments:

Some more Mutants and Warrior of Renown

Added a few more models.  Harry the Hammer is one of the models.  He'll be destined to a regular rank and filer, but a cool looking model.  Also have two more half-breeds. 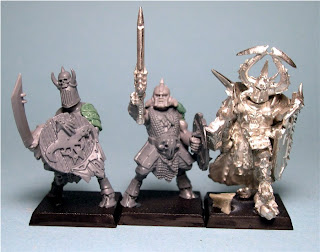 Using the Bestigor bodies again.  These will be part of the marauders again.  The metal sword is a leftover Avatars of War bit.  Rather simple kit bashes and one normal dude. 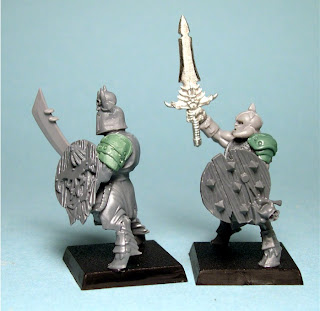 Posted by PsychosisPC at 9:11 PM No comments: 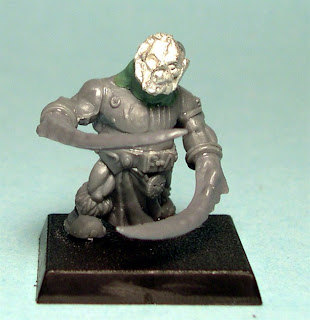 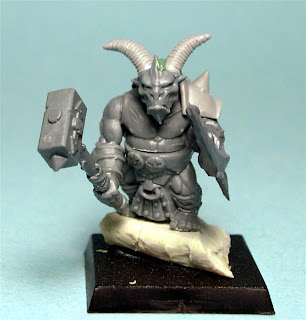 His unique profile.  I look forward to painting these little midget gors.  I think they add some strange character to my chaos army adding the mutant to the barbarians. 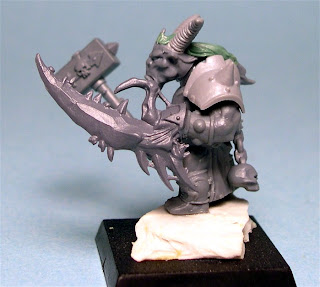 Now back to turning some wrenches on the kart, fixing some things.
Posted by PsychosisPC at 8:21 PM No comments:

Some more additions to the Mutant Marauders

No racing tonight, got rained out on Wednesday night, race again on Sunday. So tonight we have beastman/bestigor with a weapon swap.  Another model that will be part of the mutant marauders. 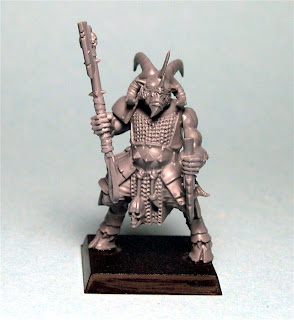 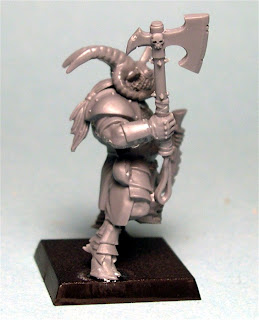 And below are a couple of the Avatars of War dwarves that I also plan to use in the Marauder unit. 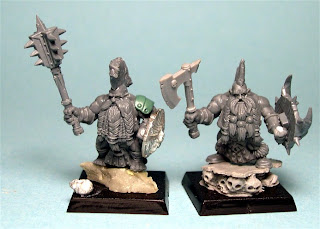 Again some simple weapon swaps and chaos shields along with a few chaos chains.  Straight forward stuff.
Posted by PsychosisPC at 8:19 PM No comments:

I've been doing quite a bit of kit bashing lately as I build a few other things.  Also getting ready to bust out the paint on some Vikings and Warriors of Chaos at the same time.  10 of each out to work. 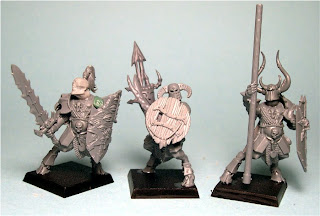 I really like how the one on the left turned out.  Very appropriate for a blind chaos model to have his eyes on his shield.  The middle one is a fun one also, I've used this chaos space marine arm on a number of marines conversions before, this looked like a good use for it.  All of these are putting emphasis on my mutant theme.  I'll use these as chaos warriors or marauders. 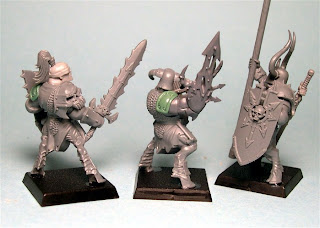 All in all, I really like the bestigor body model.  Very dynamic, much better than the chaos warriors.

I've also come to the conclusion that I may be approaching the end of me doing chaos modeling for awhile.  I've grown tired and don't feel the enjoyment of modeling them as I used to.  So we may be nearing the end of chaos kit bashing for me.  I will carry through painting this huge army, there are a few more pieces to finish up and add to the army, and I keep looking at other very cool pieces by other manufacturers that I want to add to my collection.  I have all of the GW stuff that I need to do some more chaos knights and probably will as I scoped out some really cool Puppets of War stuff recently.  I have way too many projects that need finishing, this is one of them, the vikings is another, the Fire Forge models, some Napoleonics, Space Marines loyalists, Orcs, and some more Romans.  So, soon I'm switching to paint mode.

Not something that I wanted to do, but preparing for possibly the inevitable.  I picked up this ruleset by selling a couple of minis to pay for it.  So far I like what I have read about 15 pages in.  If there is going to be a possible exodus from my game of choice, Warhammer Ancient Battles due to the shutdown of Warhammer Historical, then I'm likely going to gravitate to one of its clones and so far I like what I see of CoE, the only thing I dislike so far is the metric system.  As an American and an engineer, don't get me started on the damn metric system.  But I know that 1 inch equals 2.54 cm.  I see things in inches and feet and yards, not centimeters.

Now you may say, like many, why not Hail Caeser.  Well HC is not for me, I think its rules are better suited to Napoleonics simplifying many complexities.  And I don't plan to ever play Napoleonics competitively, even if I ever find someone that shares the interest of that period locally.  Black Powder is one thing, but when I play with my ancient armies, I happen to love Warhammer.  I love the core rules of Warhammer, if I have to play a different rules set its going to be one more like Warhammer was.  I also don't believe that HC will make for a very good tournament rules set.  This is not meant to be a knock against Warlord Games or people that enjoy HC, its just not my cup of tea.  So no plans to play it, ever.  In the near future I plan to have another ancients tournament in La Crosse and River City Hobbies, the rules will be Warhammer Ancients, its what I like the most.  This probably won't occur until this fall, I'm going to be busy racing through the rest of the summer and through September.

Tomorrow night, I strap on the helmet and go oval track racing once again.  Its been getting rather rough the last 3 races or so, lots of rubbing, bumping, spins, and what not.  Maybe a week off will have an effect of tempering that.  We'll see.  Supposed to be hot tomorrow, but the evenings have been cooling off okay and the road race last Saturday was a better test of fitness in the heat than the Oval is.  I also won't be packed into that old vintage kart, you don't realize how uncomfortable that old kart is until you run 8 laps in it on 1/2 mile plus road coarse.  Hope to have a successful evening.  The season is winding down, I'm currently the season championships points leader by a small margin.  Next week we race twice, as its La Crosse County fair week.  So I'll be at the track Wednesday night and Sunday afternoon if it does not rain.
Posted by PsychosisPC at 9:57 PM No comments:

The motley crew below is a number of figures that I've been cleaning up and assembling.  On the far left is the Avatars of War Barbarian Champion and on the far right is my newest Banelord Beast.  These two will be in my Marauder Unit. 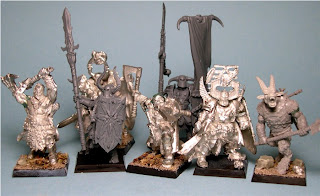 Below is a kit bashed Bestigor/Chaos Warrior.  The miniature will be part of my Warrior Unit with halbred and shield. 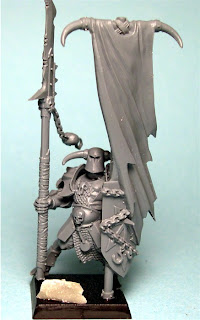 Shot of the figure from behind.  This will help emphasize my mutant look throughout the army. 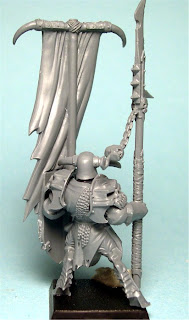 Below are a couple more of the kit bashed.  I think they look heavily armored enough to fit in. 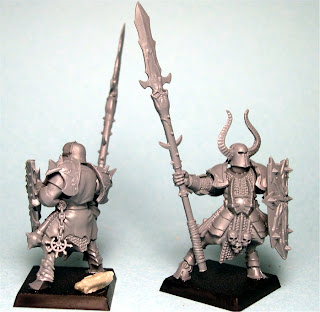 Finally got around to adding hair to the Bugman's head, now it looks fitting for the Warrior's body. 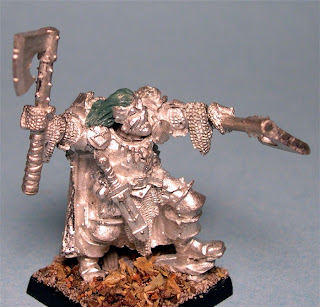 I have two of the Wulfrik models.  The body is cool looking but the head is terrible.  So I did head swap with a chosen head. 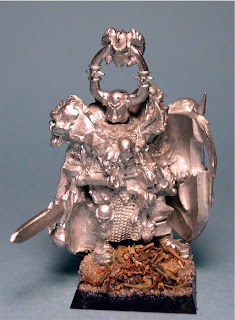 Below is the second Banelord that I picked up.  Good high quality resin miniature.  I did have a bit of gap on the left arm.  So I added a band around the bicep in GS to cover that up. 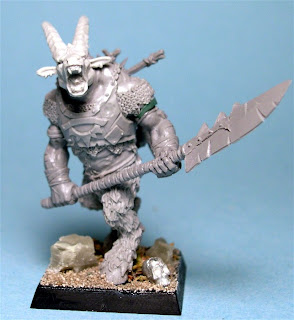 Metal skull on the base is from Secret Weapons' Bag 'O Skulls.  This is cool miniature, really look forward to painting it. 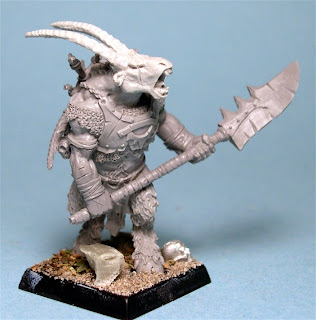 That's it for now.  Travel and racing tomorrow, working on some of my vehicles Sunday.
Posted by PsychosisPC at 10:56 PM 2 comments:

Had a bit of time to finish up the remaining skirmishers.  Something that was suggested to me was to make the helmeted ones a bit more conical in shape.  I'll be going back to in with the GS work and 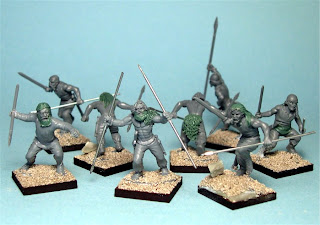 see if I can in fact do just that.  I'm building some other stuff currently and doing a bit more GS work on the fourth Viking unit as well as work on the Lost In the Warp crossover project, which may be expanded to include the Butcher's Bill.  I also was successful in patching up the horns on the Banelord Minotaur.  So as always much more to follow.....

-------
On the karting side of things, we did some evaluating of my kart.  I felt that I lost speed as the night wore on.  Prior to the Feature last week we noted the key in my axle was coming out.  After looking at it some more it was not just the key.  The week before last I damaged my chain and replaced it.  So we knew something was going on.  Well after looking over everything again the chain was binding and the sprocket had also moved.  That definitely took away speed.  So a new collar and key and realignment. All in the quest for speed.
Posted by PsychosisPC at 12:42 PM No comments: 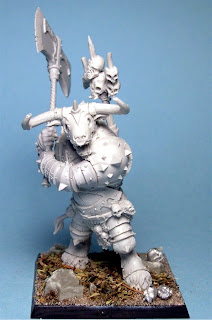 I recently sold a few of my older Beastmen, so I thought I would replace them with a newer model, this is from Maelstrom Games, one of their Banelords.  Its the first of two models that I recently picked up from them for my Warriors of Chaos army, rise of the mutants.  This was also my first time working with their resin models.  Quality is pretty good, not too many imperfections.  Mold lines are in places that you can mostly get to.  The axe handle was severely bent, so boiled some water and bent it somewhat back to shape. 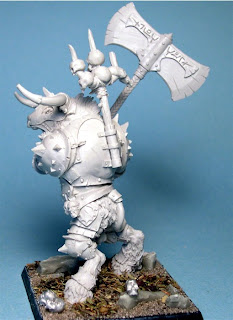 The points of the horns do have air bubbles.  I'm going to attempt to fix that with some GS work.  As you can see the basing is using my fake rocks and ballast.  I added Italian Seasoning, and some Secret Weapons loose skulls.  I really love the heavy plate armor all over on it. 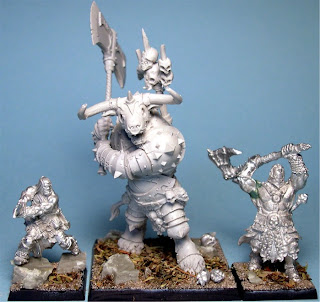 As you can see above the model is huge.  At $35 it better be.  I've placed it on a 50 mm square base.  My plan is to use it as a unit filler for my Warriors or Chosen unit, I think its fitting with all of the armor on it.  And it emphasises the mutant theme.  To give an idea of scale, to the left is Tre Manor's Red Box model, also in the army about 25mm, and to the right is Avatars of War's 32mm Marauder champion.  All of which will be in the same army.