It's a Khorney Knight and one of Tzeentch

I do very much favor Khorne above all of the powers of ruin. The sheer evilness of it for some reason really appeals to me from a visual standpoint. On this mini, I decided to play up on that Khorne theme, adding grizzly trophies and skulls. 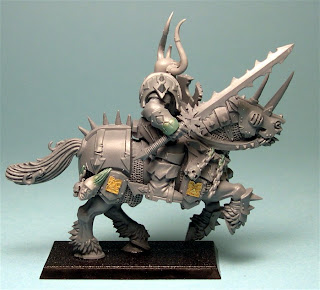 The sword is from a bloodletter, the Khorne icons are Forgeworld brass etch. 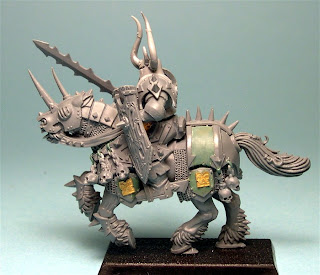 There was kind of an ugly armor panel on this hors and I wanted good smooth panels for some freehand painting, so I filled that with GS and smooth out the panel. More skulls, more symbols.

The head is one of my favorite heads from the chaos warriors foot troops. I love the design of the horns on it. 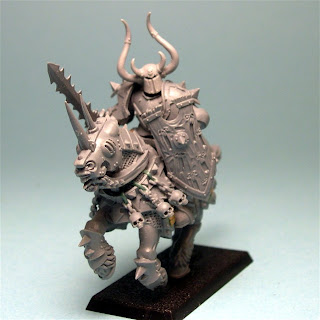 Onto the next Tzeentch Knight.... 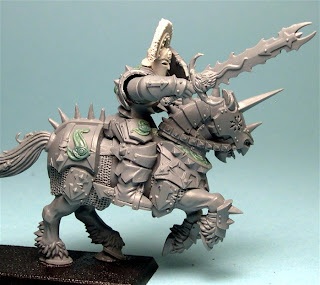 Again used the MaxMini head. This going to be the unit champ and mouting him far forward on the base. When you make your movement trays extra large like I do, you can get away with this. I'll put some eye-candy on the back of the base. 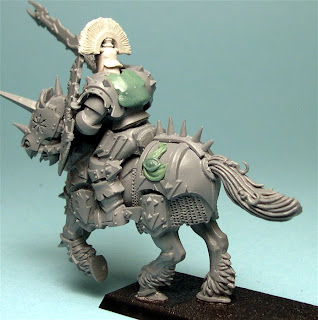 Note I added some Tzeentch symbols. These were done in two steps. And I wanted to show the back of the miniature. This one will get a cape added to it, but one thing that needs be done prior to the cape is to build a support, so that is what you see between the shoulder pads.

Posted by PsychosisPC at 7:52 PM No comments:

Black Orcs in the making....

These are for the VC Bashin' orcs. Namely the back rank of 7 wide and 3 deep, so more of these guys to follow.

Mostly for the conversions I stuck with weapon swaps, glyphs, and fur. These models like the chaos knights in the previous are simply too big for their bases and so really crazy conversions are not really easy to pull off if you want them to rank up. Note I've turned the outside models of the rank towards there respective outside. This helps in ranking them up and also makes the exposed flank look a bit cooler in my opinion versus just everyone facing forwards.

Here is shot of the back of the group, showing off the capes and fur. 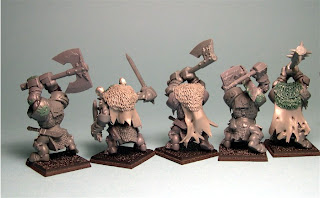 And the rest of the group. 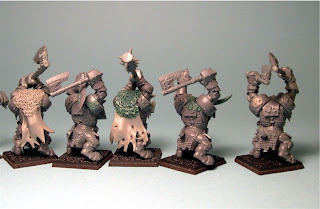 The metal skulls are from Secret Weapons big bag of skulls, something like 100+ in a bag. I'm at the point now with the glyphs that I can practically do them in my sleep.

Next up back to more Chaos Knights.
Posted by PsychosisPC at 7:51 PM 3 comments:

Now that the craziness of Adepticon is behind me, its back to my Chaos Warriors and attempting to get about 2500 points total done by summer. I'm already around 1200 pts so its very doable, especially since I have large number of marauders that just need a little finish painting.

That said I need some things that hit harder and are good on the flanks. So that means some knights. I've already started a few Khorne Knights, but I also wanted to do some Tzeentch knights. Here is the first of a unit of 6. 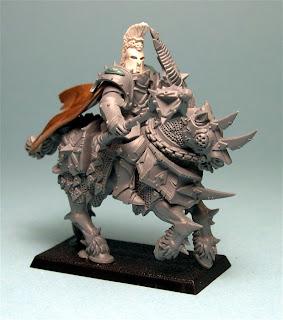 I gave him a Max Mini head to give a different type of look to him, added some Tzeentch icons to the shoulder pads, and a cape that I sculpted out of Brownstuff. 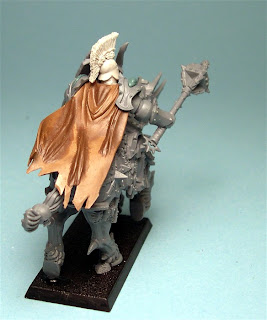 The cape still needs a bit of work, but I do want to keep it somewhat bare to do a bit of paint work on it. My army is all blue and burnt orange and will be no matter what the models are marked. No GW Circus Candy for me. 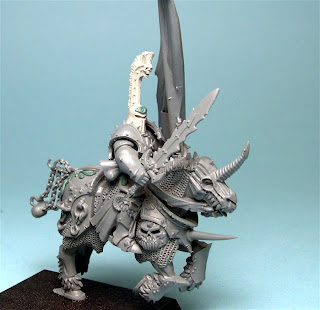 The next model is the banner man. This one will be sharing a 50mm base with the musician. 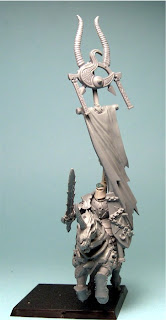 I borrowed the Tzeentch icon from the chaos space marines. Not real flashy until you look at the back. 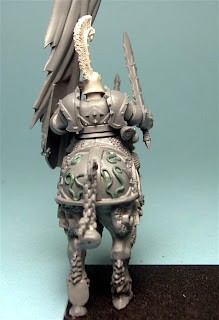 Not sure this will work yet. I may not like it after I start laying down paint. If I don't like how its turning out I'll take it off and just freehand paint the patterns in.

Next up some VC Bashin' Black Orcs, more Tzeentch Knights, and probably some Khorne Knights.
Posted by PsychosisPC at 8:38 PM 2 comments: 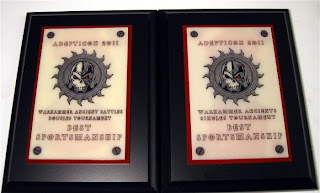 My work space in my current home is still in ruin from the water damage suffered a few weeks ago, taking forever to dry things out. Basically everything I had in that room is in boxes in my other rooms and garage. And I'm continuing my search for a permanent home, as this was a temporary one anyways while I settled in to the new job. So my work and photo taking has been down a bit lately that coupled with Adepticon taking away my spare time.


Many thanks goes out to the Adepticon guys. I had a great time, and came away with the above awards from the Adepticon Warhammer Ancients tourney. Those awards were really quite shocking to me, a very pleasant surprise in deed as all the games I played were great fun. For the team part, got to thank my team mate in Mike Butcher. I think this was the best we have played things in the many times that we had teamed up for this tourney. The plaques were not the only thing that I won, I also got a fancy limited edition miniature, 2-boxes of Warlord Games Barbarians, and a box set of Crusader Miniatures Irish Warband which I traded with my Mike for his box of Crusader Byzantines and blister of Byzantine command. This in addition to the rest of the free stuff in my big bag of swag just for showing up. A pretty cool haul, and I definitely appreciate everyone's efforts in arranging the tourney. If you like tourneys have not been to Adepticon you are definitely missing out. So that does it for Adepticon this year. Next up its back to Orcs as I plug away at attempting to get a unit of Black Orcs done for the VC Bashin' Commission. Then its on to painting some Chaos Warriors and building my new Space Marine army.
Posted by PsychosisPC at 9:07 PM No comments:

I believe I debuted this unit of dragon ogres at Adepticon back in 2004. The current GW dragon ogre is a very old metal model. Not great looking model and it very much shows its age. 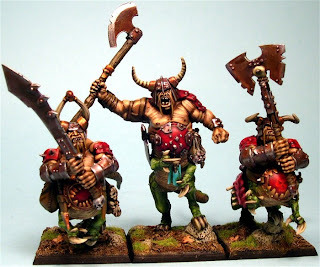 I decided to update that model with a serious amount of conversion work, taking a plastic ogre model and merging that with a Lizard Cold One plastic model. This lizard model has since been updated by GW. 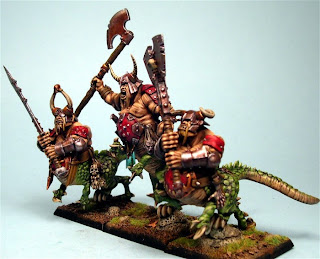 I think they turned out pretty well. Paint wise I was very happy with the results. Conversion wise the models could have been a bit better. Back then I really did not know how to do scales. 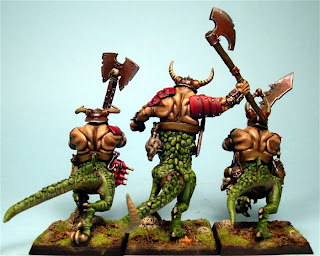 The tails had to be extended to give some balance to the models, and each individual scale was a flattened piece of putty. A very tedious way to make scales. 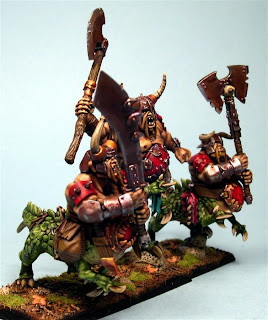 The axe the center model uses is from the old metal minotaurs. The other axe was from the metal chaos trolls. 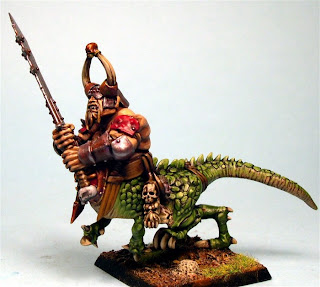 Onto Adepticon Warhammer Ancients results. As stated previously, my buddy Mike Butcher won the Singles best general, Aaron Lewis won best appearance singles with a beautiful army, Bennett Blaylock Doan won best appearance team with Dylan Gaulker, and I managed to take home Best Sportsmanship and then teamed up with Mike in the team event, where we managed to get Best Sportmanship. I was looking around and found that the Chicago Terrain Factory took some pictures of the event, much better pictures than mine. So I'll link you to their blog if you are curious:

Adepticon WAB Singles pics: http://chicagoterrainfactory.wordpress.com/2011/04/04/adepticon-wab-singles-tournament-armies/
My Roman Army is in the fourth row down and Mike's Saxons are the first pic in the sixth row.

Row 6 of the photos, shows pics of my and Mike's team effort of his Saxons teamed with my knights. More of my knights to follow soon.
Posted by PsychosisPC at 10:39 PM 7 comments:

Back from Adepticon. It was a very enjoyable weekend. The event got even bigger, and appeared in my opinion very well attended, especially in 40k and Warhammer Fantasy. Got a good sizeable bag of cool product for registering and showing up. And I also got to meet a number of new people, like the owner of Battle Road Games who played some fantastic looking Samurai in the WAB Tourney, and Xenite over at Little Green Monsters got to see his Chaos Warriors in person, and a couple people that frequent the WAB Forum, and some new WAB players for me one from Wisconsin that had a spectacular looking army (I'm pretty sure you will see pictures of it from Dave Taylor and possibly the War Games Illustrated crew. Also got to meet up with a bunch of the Wisconsin and Minnesota guys that I have not seen in awhile. Bennet Blaylock Doan again blew me away with a wild looking Hun Army. The Crystal Brush painting cost had some spectacular miniatures, I unfortunately did not finish any of my entries (They would not have won).

Played Warhammer Ancients Singles and Warhammer Ancients Team Tourney. My Singles play was with the Romans, went 2 Wins and a draw. Which is pretty good for me. Ended up taking a surprising Best Sportmanship Award along with some cool swag that went with the prize. My buddy Mike Butcher took home Best General.

Warhammer Ancients team event, paired up Mike Butcher's Saxons with my Knights from the El Cid list. We did well getting 2 wins and draw. And we ended up taking home a surprising Best Sportmanship Award in that event also with again very cool prizes. This considering our team name is Grumpy Old Coots for obvious reasons.

All in all a fun weekend, very tired, may take a few days to get back in the flow of things.
Posted by PsychosisPC at 6:37 PM No comments: