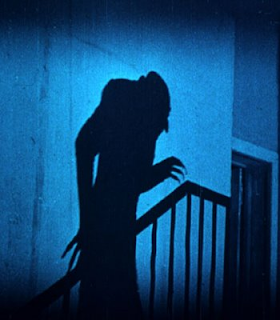 Might it possibly be the long awaited blog crossover with Mike Butcher’s (Golden Demon and GT winner) the Butcher's Bill and my very own The Madhouse Workshop??? …..hmmm…..if you are not a member of Lost In the Warp and the Butcher's Bill you may want to join and watch.
I guess you will have to mark your calendar and tune in on November 1st and find out as it kicks off at Lost In The Warp.
Posted by PsychosisPC at 7:38 AM No comments:

So I finished reading Outlaw, the first in a series of novels written by Angus Donald. The story is about Allan Dale part of the infamous band of followers for Robin Hood. I've read a number of stories on Robin Hood and watched a lot of awful Robin Hood movies (and a couple okay ones)over the years, so I kind of suspected that this book would just follow along the beaten path with the legends like all of those others. Well, I was wrong. I also saw the sticker of on the front cover stating as good a Bernard Cornwell or your money back. That's not something I see very often and was very skeptical that this author, Angus Donald, could be that decent. Well, I was wrong.


I quite enjoyed the story of Allan Dale and the portrayal of Robin Hood, Tuck, Little John, and Will Scarlet from Allan's perspective. Its a much harsher Robin and John, very much in my opinion, a more accurate portrayal of what someone like Robin would be like in this particular period of time in England. There was of course a sort of ruthlessness one needs to be to survive and overcome. The story takes place right prior to the crowning of King Richard, and if I hadn't seen what the title of the second novel was, I probably would not have been able to guess how it ended.


The story is very much written like a Bernard Cornwell novel, definitely reminded me of the Saxon Tales in which Cornwell has Uhtred telling the tale, with the difference being that Allan is very much telling the story of Robin and of his relationship and history with Robin and not as much of himself like Uhtred does. Its very similar to Cornwell's Agincourt. So if you are fan of Bernard Cornwell's writing, you will probably like this book. I know I was pleasantly surprised by it, and that I definitely plan to read the next novel since it appears that Allan and Robin will be going on crusade with King Richard, a period of time that I do enjoy studying.
Posted by PsychosisPC at 6:17 PM 2 comments:

WIP On the Desk: Clear of Chaos...Onto Pillaging

A pillaging we go...that's right...13 Chosen have moved off of the desk, one chaos Avatars of War model remains and ungor marauder.  So its onto the Vikings.  This is elements of two units, I made good progress on them so far.  I'll probably get another hour in or so tonight on them.  The Chaos will be getting shot with some clear tomorrow and then some static grass. 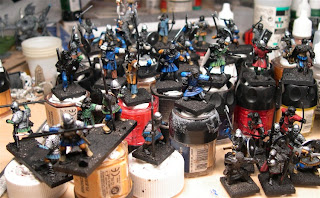 They are kind of a collage of color at the moment.  Lots of washes and glazes to go.  All of the fleshtones, wood, and hair to do yet.  A lot of leather straps.  But I'm getting there. 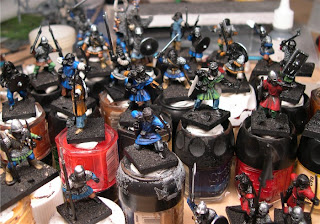 One of the Vikes that is close to being finished. 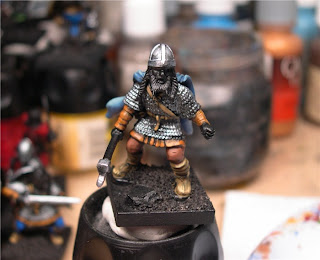 Shot of another at the moment.  I picked up a bottle of Secret Weapon's Soft Body Black Wash.  I used that on the Chaos Chosen armor and found it to work really nicely for my style of painting, much better than Tamiya Smoke.  I'll be using that to tone down the metallic armor and bring out a certain amount of definition. 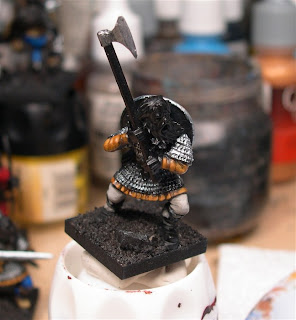 Another random selection.  This is one of the models that will be in the front rank of Unit C.

And later this coming week....kick off of the Crossover with James Craig's Lost In the Warp and Mike Butcher's Butcher's Bill blogs as we do the blog crossover project....we will be showing the build pictures....tune in, keep your eyes open....and we will have some fun.
Posted by PsychosisPC at 8:02 PM 2 comments:

On Saturday, October 27, 2012, I and local hobbyist, will be holding a Painting Seminar. Time: 1:00pm to Whenever. Place: River City Hobbies, downtown La Crosse, WI - Most Likely in the Game Room upstairs.

Do you want to paint more than the three color minimum??? Do have questions on how to highlight, how to shade, how to glaze? paint bone colors or fleshtones? What brush works for what??Wonder why all of your GW paints always dryout??? Where to get your supplies?? Tips and tricks of the trade???? and the inevitable How did you do that???
And no question is a stupid question, only the one that is not asked.

Well here is an opportunity to learn from some grizzled veterans, one bald and one balding and grumpy. Newbies are welcomed and encouraged to attend just as much as veterans. I won't keep any secrets on how I do what I do. Learn from our stupid mistakes. We will bring lots of examples, everything from Fantasy to 40k to Malifaux to Steampunk to Historicals.

And the best part is, it is FREE! That's right FREE!!! (Although donations, food, and go-karting sponsorships are welcome)

WIP On the Desk: Chaotic Progress

Well, did not make much progress this past week.  The following is where the Chaos and random Vikings stand at the moment, while I get ready to paint some more.  I've applied two leather like colors, and applied the base color for the skull/bones, the bronze with a gold highlight, all of the burnt orange. 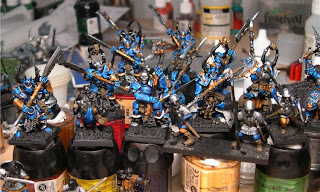 Progress on the Vikings has slowed a little bit.  All of the steel has a base coat and two metallic highlights. 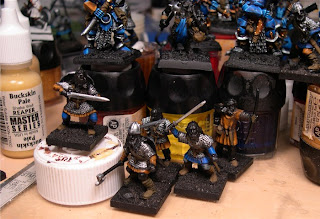 In preparation for a doing a local miniature painting seminar coming up, I picked up the GW shade and glaze colors that are in blue to see how they work.  My blues were very harsh, because I had not yet glazed them with the thinned midtone.  So I used the GW stuff to see how it works.  Honestly I can achieve the same thing just by watering down acrylic paint.  But, it did do what I thought it would . 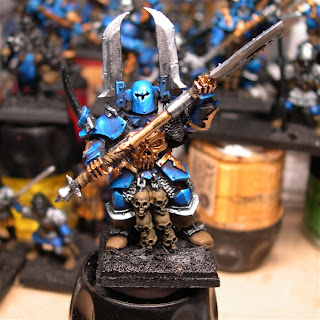 And the backside of the same model.  So more left to do.  Its rainy and cool today so, I'm going to sit down and paint some more. 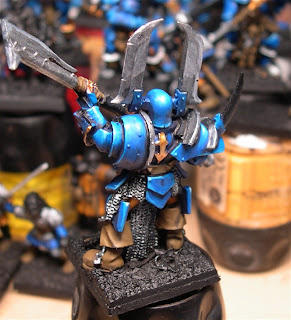 WIP On the Desk: More Chaos and Viking Painting

Painted for a couple hours yesterday and an hour tonight.  I finished up all of the blues and the burnt orange on the 14 Chaos Chosen, 1-mutant marauder, and on this batch of 21 various Vikings from two different units.  The burnt orange is basically a contrasting color that I use somewhat sparingly on the Chaos.  Its a good thing also, because its a completely custom blended color.  I haven't painted it in over a year and had to just kind of eyeball the blends with some of my older models.  Take notes at home and do that, save yourself the headaches. 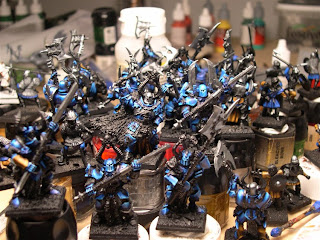 The Chosen have so much detail, but I'm recharged after seeing some of Mike Gerold's chaos northmen and Kevin Bruin's mutated freaks at this past weekends local Fantasy tournament, in which I had the honor of being the paint / conversion / army appearance judge along with the Disgruntled Ogre, Jerrod.  Mike was using many of the same cool models, with his own take, from various other companies that I have, and they looked so cool together.  He also used the new Space Wolf wolves, boy are they nice.  I won't be using them for my warhounds, but will have another project for them.  So batteries are a bit recharged and that anxious feeling of getting something done is coursing through my veins. 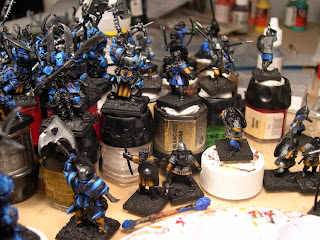 I'm always amazed at the differences in the various 28 mm scales, GW see GB.  The Chosen are so large, lots of surface area and take twice the time to paint as the Vikings.  One good thing is that the Vikings kind of break up the monotony of the assembly line of chaos.  Next I will probably do the metallic bronze and gold, then the bone colors.  The bones and horns on the Chosen are actually not painted in the same colors.  Bone will be a warm white, whereas the horns will be a cooler white.  There will be enough mixing of those colors that I will probably grab another batch of random vikings and do them at the same time in those colors.  The Chosen have no flesh colors, so I'll do the Vikings up separately.

I'll wait to weather and glaze the metallics for the last thing, probably after the basing is dry brushed.

Having fun, just need more time to paint.  I get these done, then I'll move on to a Roman replacement unit and another random group of Vikings.  WIP On the Desk, may become a regular feature....