Looking forward to this weekend at Adepticon in Chicago. Should be a good time. I will be playing Warhammer Ancients Singles tourney and will team up Sunday in Warhammer Ancient Team tourney with fellow mad-man, Mike Butcher, our team name is "The Grumpy Old Coots". If you are there, feel free to look me up and say hi.
I'll be playing with my Roman army in the singles event and my Perry knights in the team event. Yes the knights are painted, putting the final touches on them tonight.

I also see that many of the Wisconsin Warhammer gamers will be there including the Three Stooges from the Point Hammered podcast team.

Hopefully, I'll remember to snap some photos and share those with you, as this is the biggest wargaming event here in the Midwest United States and probably the country.
Posted by PsychosisPC at 6:05 PM No comments:

When the Real World collides with Hobby Time

I would like to apologize to my loyal readers for the last of posts here recently. I’ve been very busy here recently with my real occupation. Then I purchased a new PC Desktop and getting accustomed to working with Windows 7 and also transferring data between the new one and my other two computers. Then while doing my work space which doubles as my computer space received water damage once again, similar to what happened last fall, not a nice situation. I’ve had to evacuate my stuff from this space while repairs once again are being made and to allow drying this area out. As a result of this irritating situation, I’m now also beginning the search for a new place to live. Then there is the preparation for Adepticon where I’m madly attempting to get some miniatures painted in a makeshift area in my dining room for the time being. Adepticon is next week, very much looking forward to it.

Hopefully, shortly after Adepticon, things will get somewhat back to normal. I’ve started a new project in building a small Space Marine army, my first since 3rd edition 40k, I’ll have pics of my freshly painted Norman/Crusader knights, I’ll be finishing up a commissioned VC Bashing Black Orc unit, painting my Warriors of Chaos, and making some legitimate progress on my very own Orc army.
Posted by PsychosisPC at 12:01 PM No comments:

This weekend I will be playing in another small Warhammer Fantasy tournament. It’s a 1000 points, held locally in my area and has become an annual event. The whole concept of this tourney is to get local turnout and involvement, and hopefully give many of the locals incentive to build their armies up and get them painted so that they can play in the fall annual tournament that requires painted miniatures and at a much larger point value.

This go around, I’m not all that prepared to play, and don’t really have a good list for the Warriors of Chaos to survive. I thought about busting out the old beastmen, but they just are not that good and I've sold off many elements of that army, however I will be loaning a chariot to one of the local beastmen players. I’ve also not played many 8th edition games, because quite honestly I think most of the rules changes suck. Just my personal opinion. So with said, I’m going to try something that more than likely will look like a magical pin cushion at the end of the tourney, a thousand points of all Khorne Demons, once again pulling out elements my ’08 GT Best Appearance winning army. I’m going to go with a base of Khorne Herald on a Jugger, 5-Fleshhounds, and the rest will be bloodletters. The bloodletters will probably be in 2 or 3 units, haven’t decided that yet, with full command and probably the skull totem in the largest unit so that I can always march. So no magic, no shooting, strictly combat and maneuver.
Posted by PsychosisPC at 9:09 AM No comments:

I recently posted the Blorc Warboss on the right. I thought this might illustrate why I rejected him for my army. The one on the left is on the new GW boar and was a commission build for the VC Bashin' Orcs that I have building. 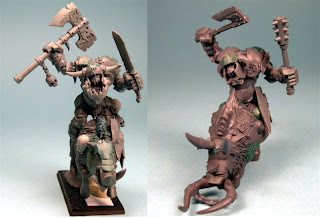 The Blorcs are definitely not an issue with me. The Boars....err...boar and feral pig are. 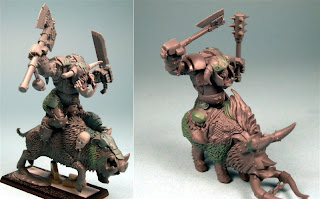 The other thing that is killing the one on the right for me is the lack of dynamics. The feral pig is boring. The Boar on the left is dynamic and much more exciting. 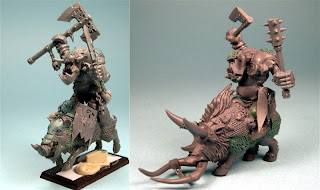 I will say the one on the right is a much easier conversion. 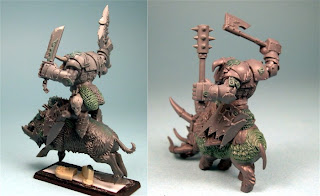 So there you go, a Boaring comparison. Ewww that was bad.

Posted by PsychosisPC at 9:03 AM 2 comments:

Well spring is coming, my old truck is not quite done, but the new go-kart is getting there. My old retired father is a racing nut, and started go-kart racing back in the 1950's. He designed and built a bunch of new go-kart frames. So this is mine with body/nose on it. And yes he is going racing this summer.
Decided to paint the top of the body in blue, left over paint from 1988, actually the color and paint from my first truck. The black is the fiberglass gel coat and will probably get a bit abused. And I do have a decal number and of course the my name Psychosis is on it, its on the other side, should have shot a picture of it. 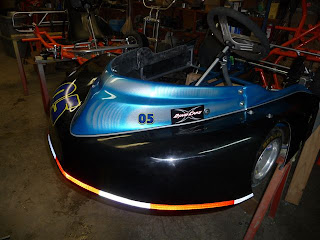 Pictures of the kart frame without the body. This is a much heavier and better built frame than the kart I was running for fun on dirt ovals last summer, which was an old Italian made kart from the 1970's, and I broke the frame half a dozen times. Lots of welding repairs on the old one. This one will hold up to the abuse. 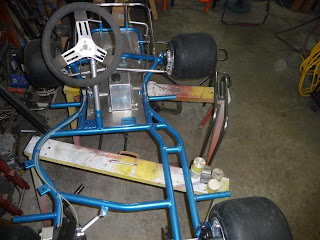 Yes its set up for oval track racing, not too many road/sprint courses around here. Plan to run on dirt and pavement. And yes the right front tire is all of 11-inches wide. There is a ton of stagger in the kart. The left front is about 6-inches wide. Its even set-up so that I can adjust the camber in the front tires. 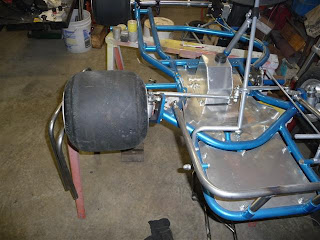 Posted by PsychosisPC at 6:35 PM 3 comments:

I've said this before, but once and awhile you build what you think is a cool model. 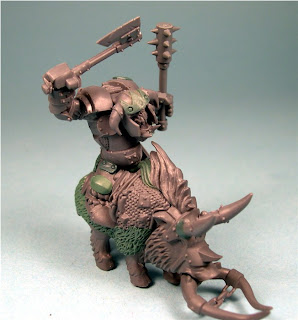 Then the more you look at it, the more you dislike it. When I started this model, I hadn't had the new boars on hand. 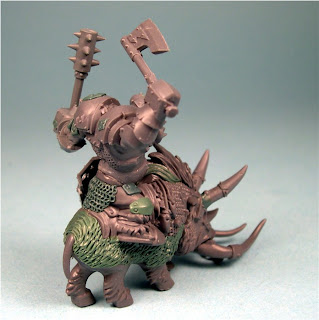 I just had this pig, well actually, three of these pigs. Not a very nice model. 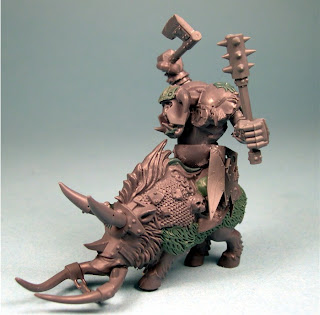 I'm okay with the conversion, but not not with the boar....errrr...pig. 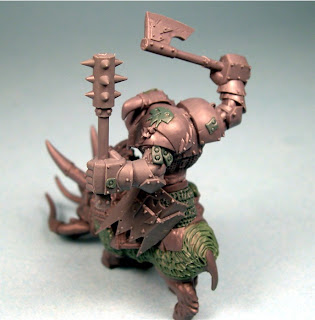 So this is the first model in my orc army that I rejected. I'll replace it with a model on the new boar. This old one is just not very good and won't cut it for my new army.

Posted by PsychosisPC at 5:39 PM 6 comments:

I read a post over on Warhammer 39,999 and then over Dave Taylor's and the Sons of Taurus about linking and bringing attention to new readership of old posts, favorite posts, and other such things on the blogs. I started this blog in April of 2009, prior to that I started my own self promoting Forum back in April of 2006. I think its a great idea, there are lots of tremendous and possibly inspirational pieces out there that are buried and that may help people out, or just bring back to the fore-front that really cool looking stuff. These things just need unearthing once and awhile.

So since I have not been blogging all that long, I'll one up this whole thing, I have lots of old stuff to pull from, stuff sitting in my cases that haven't been seen in awhile. Pictures of stuff from buddies and in game action, again things that have not been seen in awhile. What I'll try do once a month on a Wednesday, post some of these old things, in hopes that it may inspire or allow you to point and laugh "Oh I remember that horrible old model".

So here we go.

Old Blog Post: Most Popular of posts all time. I found this interesting in that these two posts are only separated by 3 views all-time.
Skaven War Litter I: http://psychosispc-themadhouseworkshop.blogspot.com/2010/06/something-differentskaven-war-litter.html
Nurgle Infested Chaos Space Marine:
http://psychosispc-themadhouseworkshop.blogspot.com/2010/06/nurgle-infested-chaos-space-marine.html
The funny thing about those two posts, is neither of them are my favorites from a post or model standpoint. Matter of fact I rather dislike that Nurgle Space Marine.


Now onto Old Models: Over the years, there have been lots of models that have I have a soft spot in my heart for, but this unit in particular is probably one of my favorites of all time, its a unit that probably put me on the map as figure of speech. It was back in 2006 at the Chicago GT, back when the Warhammer Fantasy Chaos Beastmen's bestigors were old metal models. I decided I did not like them and built this unit out of plastic beastmen gors and plastic chaos warriors. And the unit later that year was pictured in White Dwarf Issue #323. 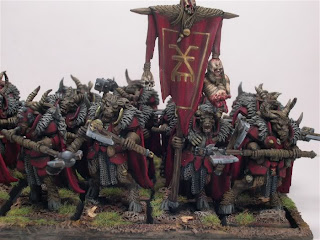 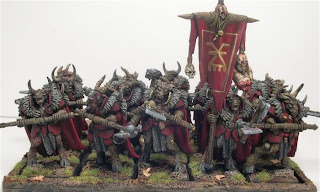 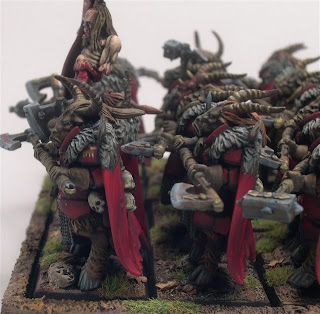 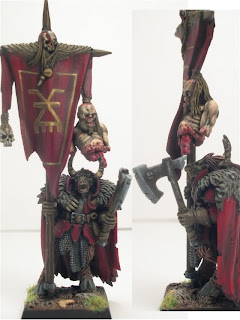