Well made a bit of progress on the standard bearers.  Also have a few more in the works.  And I added another character(figure on the far right), a Gorgon Miniatures Saxon that I got at Adepticon a couple years ago.  Figure reminds me of the Saxon from the Bruckheimer King Arthur from a few years ago. 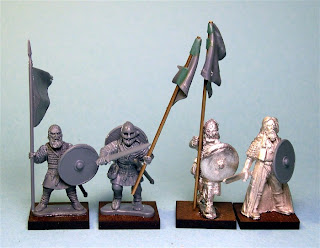 Below is a different view of the standards.  The two on the right use flags from the Fire Forge Teutonic Knights kit.  The one on the left is using a piece of banner from a Goblin standard, fused to the spear shaft with some plastic cement.  Have a bit more work to do on it. 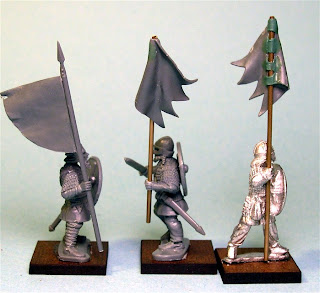 And today was Sunday, and that meant go-kart racing.  I had a first and second in the heat races, which qualified me for the outside of the second row in the Feature.  In the Feature I worked my way from fourth, up to third and then second, then nearly spun it out, went back to third.  On the final lap I closed on the 1st and second place karts, threw it underneath the 2nd place kart could not make the move stick and cost me third in the last corner.  So a fourth place and sunburn, not the best, but that's how it goes.
Posted by PsychosisPC at 10:38 PM