I fell in love with Gripping Beast’s plastic Viking Hirdmen have been out for quite some time, and I had been waiting for GBP to come out with this kit so that I could use them as Fryd and Bondi.  The design of these are bit different than the plastic Vikings and the plastic Saxon Thegns kit.  I think GBP must have caved in to the pressure of all of those old fogey historical miniature guys that like stale and stagnant poses that make it easy to rank up so that they can slap spray bombs of ugly paint on them.  Okay so maybe I took that a bit to far, but I really like modular kits that I can change and pick and choose about everything that I want to put on them.  This kit does not have that versatility in comparison to the Vikings and Saxons, and you will see what I mean about that.
Review of the Sprue

Here we see the sprue, lots of options for heads and a few options for weapons. The sprue is another great Renedra sprue from GB’s creation, much like I have seen recently with the Perry’s, Warlord Games, and Conquest Games. The details are crisp and the quality is as good as anything that I have seen from Games Workshop or Warlord Games or the Perry’s, etc. The parts are arranged well and are quite easy to remove, with the exception of the tabs under the model stand, but those are in a location where you can get a bit physical in removing them. So far I have not had any major issues with flash and I have built close to 40 of them already. 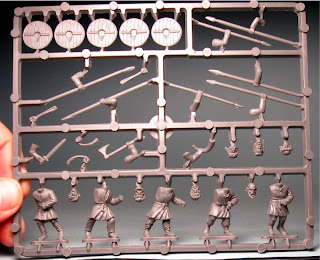 You get eight of these, the only sprue that comes in the box set.
Value

Pretty good bang for your buck. I picked mine up at Architects’s of War for $32 and you get 40 miniatures. Not quite as good a deal as the Vikings and Saxons.

As always with me, I am a converter and hobbyist, and this is normally one of the things I complain about is head variations. I have not mastered sculpting heads yet so I need to rely on the companies giving me enough variations to work with. GB has certainly done that and then some on this kit. There really is only one of the heads that I don’t care for and even then that one has its uses. This is a good effort on their part. Again its not quite as good as the Vikings or the Saxons kits, but they are the same scale as those kits and interchangeable, so that is a Touchdown!  Below you see on the left one of the Dark Age Warriors with a Saxon head. 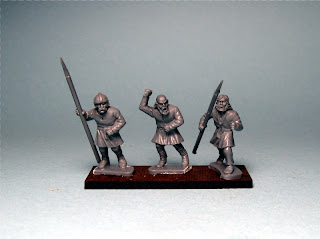 The detail is not quite as sharp as the Viking and Saxon kit, this is something that I have noticed particularly on the bodies and weapon arms.  The shield are pretty much the same as the Viking shields. 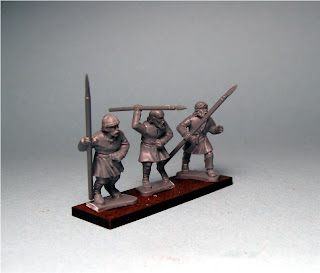 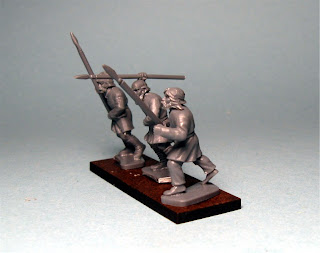 Limited number of variations.  Even more limiting is that the left arm is molded to the body, that sucks in my opinion. One of my gripes for the kit is this and three of the bodies are a killer for conversion work as the left arms hug the body.  Not enough variety, I very much prefer the way the Vikings and Saxons. I’ll get over that though.  They are very easy to assemble in stale and bland poses, very much not a challenge. 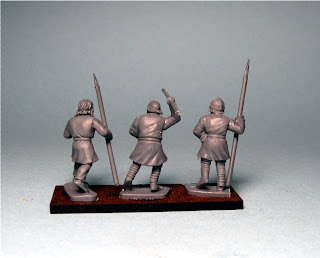 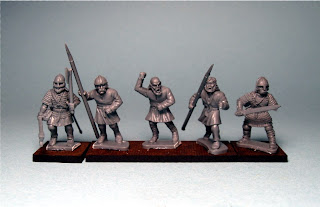 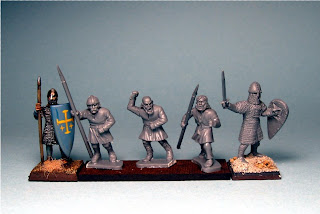 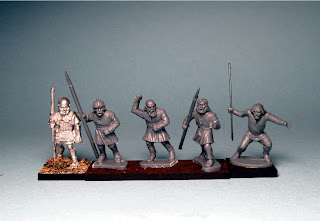 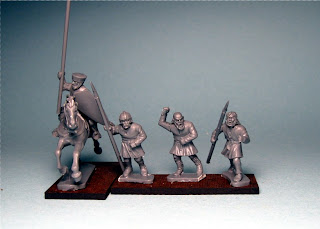 So, very nice comparable scale to some other lines. 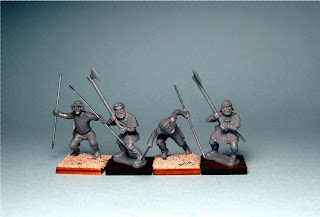 Below is the coolest head use on one of my Saga Vikings. 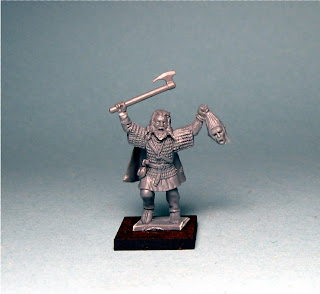 Overall I like this kit.  Again, not as good as the Vikings or the Saxons, but I love the heads without the helmets and they swap well with those kits, something that was very much needed to give them more variety.  The future continues to look bright for historicals.
Posted by PsychosisPC at 4:30 PM