I recently had sold my unit of Praetorians, so as I'm finishing up the my Vikings, I decided to build a replacement unit of veteran legionaries.  I will also be building new movement trays for my Roman army. I previously used the GW modular trays, while nice and easy to put together, they are rather uninspiring to look at.  I need something that has more appeal, eyecandy. 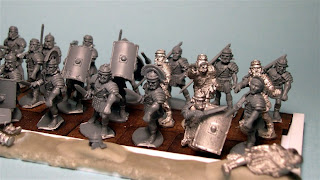 So this is the replacement unit of veterans.  I still have a bit of work to do on them, adding some grieves, and also needing to GS some of the arms that I changed and converted.  I'll do a few single pics of the converted miniatures, later after doing that bit of work.  I will paint these without the shields, and then add the shields later.  The models with the shields on them are just tacked on to see how they look.  While Warlords Legions kit is nice, it does rather lack variety in pose so I did a few different things, stuff that I did not take time to do on the previous Legions.

One thing I did forget is that, I really don't care for how these models stand.  You will notice also that I have clipped many of the bases as they are obnoxiously huge for a 20 mm base.  The guard stance is the worst of the models with the left arm molded to the body and the legs spread so far apart that they practically do not fit on a 20 mm base.  Warlord Games in my opinion, while having nice looking products is a bit inconsistent and lack in their control over things.  The scales are wonky.  This kit is barely 25 mm from foot to head.  They are consistently the smallest miniatures that I see at the tourneys.  And they often use a very lame excuse for that mistake. 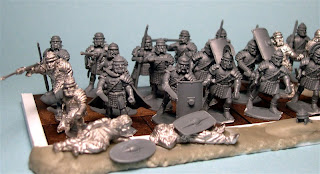 As you can see on the trays I used some of their barbarian and legion casualties.  These are probably the worst possible miniatures that I have seen come from Warlord.  They should be alright once I paint them up, but they are quite poor sculpts.

I also picked up some of their slinger Legion metals, for a bit more variety.  I once again reminded myself of why I do not like metal, its the fixing and filing of the flash.  Its much easier to remove flash from plastic.  I bought the slingers from mail order, they come with three different poses and a number of arms from actual slings to throwing pilums.  Most all of the pilum arms were junk.  The gladius arms have blades that are so thick, that they look like a slab of metal, poor quality.  The good news is that the plastic kit has enough extras to replace that crap.  The kneelers are nice, they should have done a plastic like that.  The pose throwing the Pilum is not quite right, I had to bend the arms as the normal pose has the poor Roman throwing the pilum into the ground probably an imaginary 5 feet in front of him, once again just poor.  So for the one I put some apoxie sculpt under the base to raise him up a bit, and not only that the pose barely fits on a 20 mm base. Once again their scale is messed up as the metal minis are taller than the plastics just ever so slightly, its very odd.

The overall kit is nice, but beware of the scale.  Also note my review of their plastic auxiliaries in comparison.  That kit truly sucks in comparison, and the models look like giants alongside the legion.
Posted by PsychosisPC at 3:02 PM