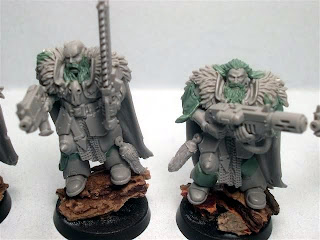 Final post of these conversions of the fantasy Chaos Warriors to space wolves.  I thnk the beards worked pretty well.  I sculpted those with a dull Xacto #11 blade that has the tip broken off.  The dull blade gives you a finer look than my normal sculpting tool that looks like a metal toothpick.  That tool I used on the hair and fur. 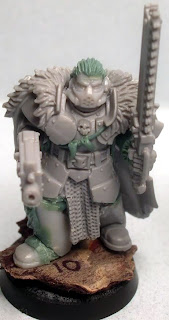 Above I added a tooth necklace.  That's a fiddly bit, you are best to seal that with a very thin super glue afterwards.

Below are some sideviews, still need to add the backpacks.  The GS chain is actually easier to do than the necklace.  There are two ways to do the chain, one where you roll out a sausage of GS and tweezers.  The other way is to add a number of beads on the model, flatten those out, punch in the centers of the flatten beads, and allow that to cure.  Once cured, roll out a string of GS, lay that over top of the beads and then using a knife style sculpting tool you push the string into the center of the beads. 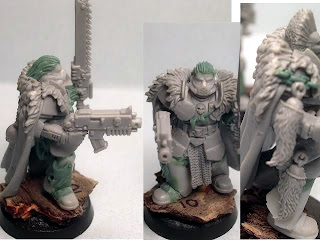 Below are some shots of the drapings.  I use to just reserve the drapings for things like Templar or Wordbearer Spacemarines, but I think if painted in a leather like color with some rune styled writing on it, it will look very neat. 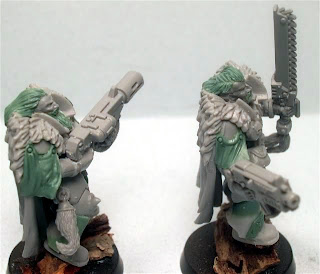 One thing you see with chaos warrior models is that ugly seam in the fur.  It shows up on the majority of the models.  So I will fill that seam with some GS and mimic the fur, like on the one below and to the left. 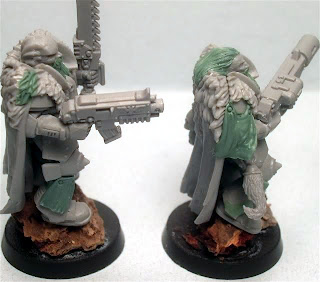 So there you are.  Back to the Vikings.
Posted by PsychosisPC at 12:27 PM