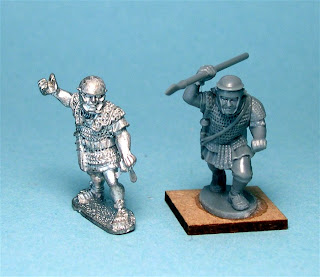 I assembled the whole box of them Friday night, they also rank up horribly.  I'm use to converting stuff and having issues with ranking, but these were box stock.  Nice looking miniatures, but a Terrible kit, yes with a capital T.  I don't recommend it to anyone, but to those people that I dislike.
Posted by PsychosisPC at 9:55 AM