No happy Holidays or I'll start on another long rant....just Merry Christmas.

I do get some strange requests often here at the Madhouse Workshop.  Most of the time those requests come from relatives.  For instance, my brother-in-law more than likely prompted by my sister requested some stuff for T-shirt emblems for his start up extermination company, something simple for single color printing.  Quite a few years ago I did this on my sisters motorcycle gas tank, all in pen and ink directly on a couple coats of color sanded clear.  Then my father finished it off by shooting more urethane clear coat over the top of it.  This was more to what I like to draw.  The flames and pearl paint was my Dad's handwork. 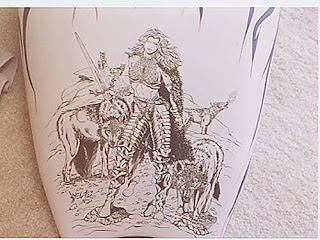 So, at first my brother-in-law wanted a Jiminy Cricket drawn up holding a spray can and then he wanted some darker.  Well I can do darker, but cartoon characters I'm not sure.  I'm about a month and half behind on the artwork so he's going to get it this weekend. 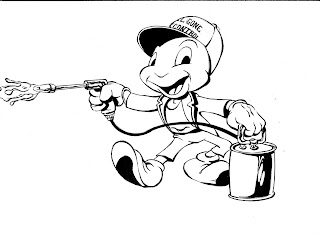 Yea, I know that looks really goofy.  I could not even remember what Jiminy Cricket even looked like.  I think I'm going to break my pens after doing this.  I have a bit of clean up to do and such.  Both of these are Pen/Brush and India Inks.

My scanner is very much a weenie, can figure it out sometimes and its only a 8 1/2 x 11 flatbed, so chopped some stuff off.  The slightly darker one has his "All Gone Pest Control"  in a nice curved pattern with some spider webbing.  Its about the size of the back of T-shirt for a Large.  Still have a bit of touch up to do.  Will probably just use a sharpie to lettering, this was close to being all pen work with the exception of the lettering fill in which I did with a brush. Yea the old fashioned way of doing things. 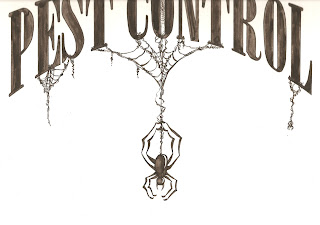 What's next...I suppose my niece will want me draw Harry Potter....aaarrrrgggghhhh.....
Posted by PsychosisPC at 9:31 AM