I’ve had a number of people ask me what projects I have on my agenda this coming year, and I tell them that if things go as planned, which they never do, I will finish for sure my Roman Legions, have a playable 2500 points of Warriors of Chaos army, painted a 1000 points of Norman/El Cid/Crusades Knights for Adepticon, the beginnings of my next major and hopefully extravagant Fantasy army which will be the brutal Orcs, and starting my British Napoleonic’s/War of 1812 army.

The Roman Legions are basically done with the exception of the movement trays, which I’ll be finishing up shortly. I hope to have pictures of the entire assembled army within the next month. I don’t think I will get done with a display base for them when I go down to Adepticon, so I plan to use my 1000 pt Warriors of Chaos display as a fill-in, it is roughly using the same basing.

My Warriors of Chaos army, otherwise known as the Mutant Marauders, is approximately 1250 pts of completely finished models. 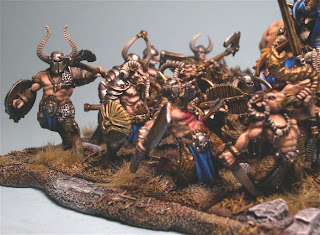 I started this army back in 2007, then the interim chaos rules came out separating beasts and demons from the book, then the new chaos book came out and I began to lose interest with them, then I got it back, then 8th edition fantasy came out and I lost interest in the game for a bit, but I like these guys and still love the models, so I decided to just keep going with the army. Not my normal style of doing things. I like to build everything first, then paint it all in one fell swoop. What makes it more complicated is that one of the colors I’m using for the army is a custom blend. I think in the next post, I’ll discuss my concept of how to I build armies whether fantasy or 40k or ancients.

The knights, something I have always wanted to do. I love reading about this period of history, I find it very intriguing and fascinating. Not much else to say about this army, other than it is meant to be for the Adepticon Team Warhammer Ancients Tournament. If it goes as planned, I will be teamed up with a bunch of Saxons under the command of the Mike “Old Coot” Butcher.

The orcs, much like my Khorne Demons, are meant to be my next extravagant, and hopefully the army will blow people away. With my Khorne Demons, my theme was obviously the evil depths of Chaos with blood pools throughout the basing and hands reaching up out of the depths of hell to drag victims down into the pits of despair. 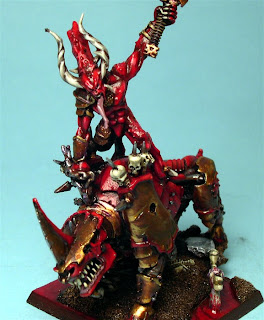 I think it was interesting change from the whole lava based Khorne army scheme that you see done over and over. With my Orcs the theme is quite simple, brutality. And that brutality in particular will be directed at humans, namely the Empire and Bretonians. The orc project will be moving forward, now that I have figured out how to do my bases and movement trays. More on that to come, and I will probably do some posts on using themes to build your armies, something that seems to often be lacking in Warhammer 40k and Fantasy from the more casual army builders.

British Napoleonic is something I’ve also wanted to do over the past decade or so, so I decided to at least make an attempt at it. In this area I know of one other person that is interested in trying this and wants to do French, so I think will try this out, probably using Warlord Games’ Blackpowder Rules.

As for the other things on tap, there will be a few one-off display pieces, some more 40k conversions, and some commission work. I’ve basically caught up with my commission work, and have decided that this year; I will likely take on less commission work than I have in the past. I don’t always show pictures of the work I do, as once and awhile people request that I hold off doing so for a period of time for different reasons. I will be continuing with the VC Orc commission project, it’s been a lot fun, and is sort of an on-going project. This is not to say that someone may come along with a commission project that I simply can not refuse. For me, it has to be something that I want to do before I take it on.
Posted by PsychosisPC at 9:42 PM