Since I've decided to expand my Warriors of Chaos army with lots of new and different models and away slightly from just Games Workshop models, I have had absolutely no regrets.  I rarely...let me repeat that...I RARELY just paint models out of the package that that I have not converted in some shape or form.   The models below are two that I have not done any converting too, and I absolute love the looks and the detail to them. 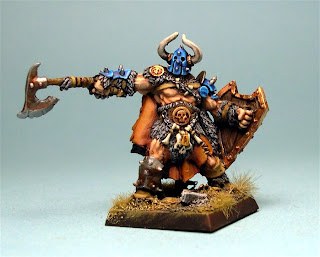 This model is one of Tre Manor's Red Box Games, Helsvakt, miniatures and it is absolutely stunning in detail and a blast to paint.  There is so much detail on it.  The skulls on the cape in the back is really cool looking.  I'm really loving all of the stuff Tre is doing for his own company and for Reaper Miniatures. 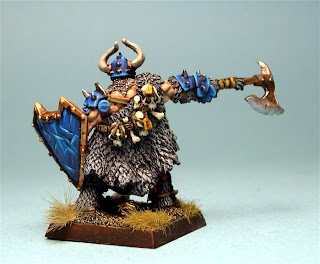 The shield below had a bunch of scars in the surface sculpted into it.  So, I thought I would accentuate that in my color scheme and make the shield sort of glow a little. 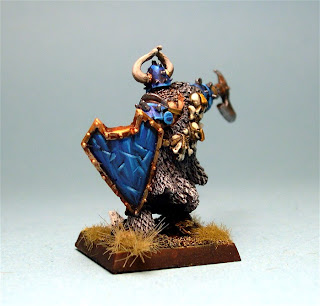 The musculature is awesome, I'm a huge Bart Sears fan and his drawing style and this sort of reminds me of this style but in 3 dimensions. 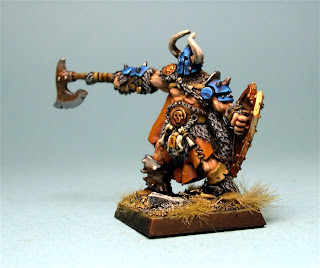 Next up is another of Tre Manor's sculpts, this time from Reaper Miniatures.  This model is huge.  The Helsvakt is about 25 mm, this model is probably around 32 mm.  Which is fine by me, humans are not all the same size, and I'm already mixing GW Gors, Ungors, both new and old with both new and old GW Marauders. 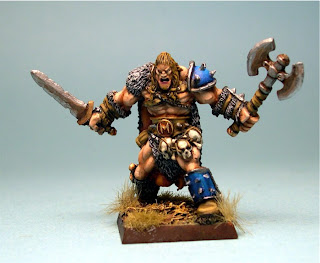 I believe the name of this miniature is Kord the Destroyer.  The face detail just screams at me, I love it.  The model itself is very reminiscent of his Helsvakt models. 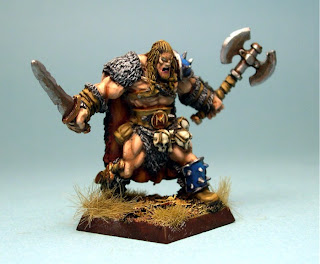 I'll be using both of these models on the extreme flanks of the units.  I'm very much looking forward to assembling the units in whole. 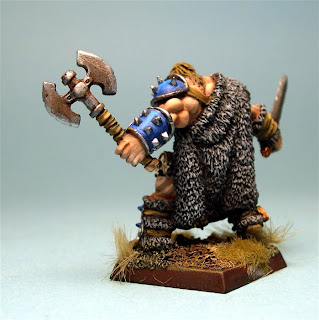 The Blue and Burnt Orange paint schemes are getting carried all the way through the army. 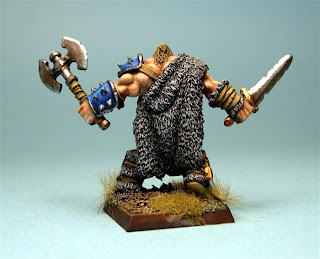 Both of these models are really going to influence me in my conversion and sculpting work in the future.  Tre's technique for doing fur is definitely making me rethink how I have been doing it. The detail is top notch in my book.  I'm putting final touches on a whole slew more of the marauders, so much more to follow on my Warriors of Chaos.
Posted by PsychosisPC at 6:52 PM