Another Khornate Space Marine conversion.  I do like this look.  One of things I did on this model was to not use the cone head or have a tongue sticking out.  I'm not a big fan of the tongues anyway.

The possessed legs dow mix well with other bits and the arms are cool also.  Added a tattered tabard to the model also. 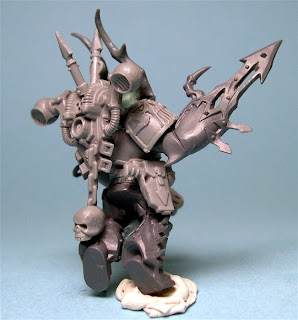 You can tell I'm beginning to run out of chaos bits in my bitz box, as I dipped into the loyalist box. A very straight forward conversion.  As is the Slaanesh one below.  Which basically just got a tabard of leftover greenstuff. 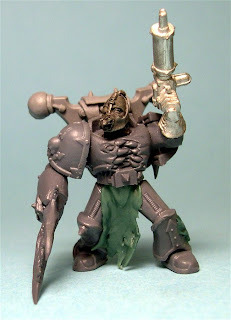 Not much to report on the Go-Karting front.  I managed to get to the track, made a bunch of adjustments to the kart, got it down to a pound over minimum weight.  They split us into two groups.  Went out in the first heat with 4 of the fastest karts in the class.  Started second to last and finished last, my set lasted good for about 2 laps, after that I was so loose that I thought I was going to hit the wall and porta-pot outside the fence every lap.  The flagstand could see my side panel number for most of the laps as I tried to save it and still run as fast as possible.  Terrible heat.
Heat 2, major adjustments in air pressure and moved in the left rear tire about a half inch.  They inverted the field, I and another clone engine were on the front row.  It's disgusting how much more torque the Animal 206 and Flathead Briggs makes, as they were lined up behind the clone on the pole and pushed him past me before we got to the green flag.  So a restart this time the clone on the pole did not even get on the gas and they still pushed him past me to the point that the kart in third was equal with me at the green flag.  They threw the green anyways, ridiculous.  I drove it super deep into turn 1 and 2 and came out side by side with the polesitter.  Ran this way for a couple laps, got around him after pinching down in the corner to scrub his momentum.  Ran in first for a couple of laps, one of the faster flatheads caught me, ran side by side with him for 4 laps.  Lost the lead and then lost another spot with a lap to go as I was getting super loose again.  Better but not good.  Made more adjustmenst in tire pressure, and went up a gear to see if I could get more straightaway speed.  Wouldn't matter as the screw job was on and they called me for a 3-wide penalty that was B.S. in the corner and sent me to back about 6 laps in, the B.S. part about it was I was not the person that made it three wide and was under someone else, the guy that made it three wide stuck his nose under me and hit me in the left rear in the corner.  They also sent my old man to the back a couple laps before me.  Complained about the call after the race, and the track official I can tell does like me for whatever reason.  And I did it nicely, basically asking for the reason, all he did was yell at me, so I got pissed and pushed him for an explanation and kept pushing for one until he just walked away shaking with anger.  It was actually kind of funny, because I never even raised my voice, and I never got an explanation, other than it was a judgement call.  Maybe its because the guy that hit me sponsered an event for them a few weeks ago. Doesn't matter, now I know the politics.  lol.
My sister jumped in my dad's kart for the pit crew race, had 12 karts on the track.  She took second in that after leading every lap except for the last one. Really good job for her first time out on the track, beating all of the guys.  Take that guys, most of you got beat by a 38 year old girl.
----------------------------------------------