Gamesday Chicago is coming up this weekend.  There should be lots of cool miniatures there, and I have already plugged the talent and the tutorials that they have planned.  Back a few years ago, a group of talented people all got together to do a Pre-Heresy theme Chicago GD.  I was contacted a bit later to help fill out the entries.  There were a whole lot of others that committed to the project and which Primarch or Pre-heresy model they wanted to do.  When I got involved Perturabo of the Iron Warriors was pretty much the only one left. 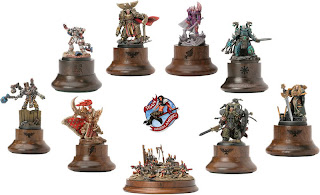 The above pic shows everyone that managed to complete their models.  Top left was Angela Imerie's model, going clockwise from there was Chris Borer, James Craig, Tom Schadle, Nathan Commanse, Mike Butcher, Joe Orteza, mine, John Schaeffer.  I can't remember the number golds, I know all made first cut, and honorable mention at least.  Chris Borer's won him the slayer sword again.

Below are pics of my entry.  I've never been happy with this model.  The converting just was not my best.  The paint was a sort of a turning point in becoming a much better painter.  When I was contacted about doing this, I was the only one in the group that had never won a Golden Demon.  I'm an army builder not a one off display piece maker. 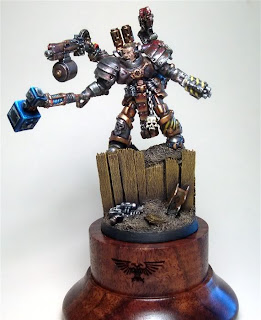 Some more close-ups.  Rather than do a complete sculpt of bigger-ized space marine, I elected to do a conversion.  In hindsight that was the wrong thing to do.  I do really like how the face turned out, as well as the sculpted crew cut. 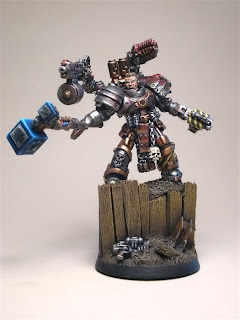 I did custom build the shoulder pads, the mail tabard, and the Iron warrior skull on the greave. 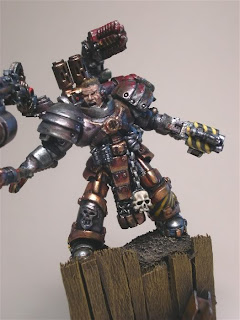 I also built the large power hammer.  For the backpack I wanted something that added that Iron Warrior feel, so the chainsword and bolter were just obvious choices to make. 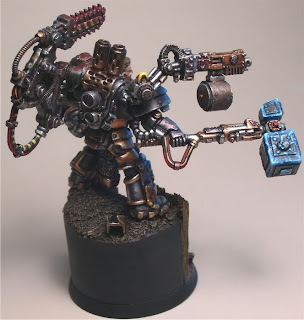 The Iron Warrior skull icon on the shoulder was another piece that I sculpted, and also on the helmet.  The blood effect on the sword bionic was a splatter and stipple effect with a tooth brush splatter and a paint brush stippling. 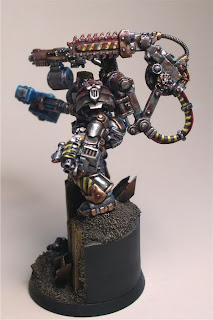 The base seemed semi-uninspired.  By the time I was done with this miniature, I quite honestly hated it.  So there you go.  Old stuff infamy...not my best work, at the time it was pretty good for me, and most certainly not Golden Demon worthy.  The best thing about it though was the respect I was shown by all of the higher level competitors, I was quite shocked by it.  Many thanks to those guys for inviting me to participate.
Posted by PsychosisPC at 6:57 PM