As I'm in the process of moving, I have no really new stuff to show, as everything is boxed up.  In the past people like Sons of Tauraus have nice enough to plug my blog, so thought I would plug a few that I discovered.  So with that in mind some of the newer blogs that I'm following:

Mr. Bugman:  This is Navarro's blog, an old grizzled forum vet.  Does some of the best Nid and bug like conversions and scratch sculpts I've seen, and lot of other cool stuff.  He's also sculpting things for a number of people and miniature companies.
http://mr-bugman.blogspot.com/

Legion of Plastic:  This is another of the grizzled forum vets, from DakkaDakka fame, Migsula.  One of the best converters on that forum, does a lot of detail crazy conversions in 40k.  He is also in the process of moving, but a lot further than me.
http://legionofplastic.blogspot.com/

Scar's Miniature Blog:  This is Dark Ritual from Warseer Forums.  A very good converter and painter of things Fantasy.  In his blog right now he is doing up a bunch of good Ogres.
http://scarminimadness.blogspot.com/

Small-scale Ramblings: This is the Hoff from Warseer Forums.  Another of the very good historical and fantasy modelers and painters from down under.  His blog is just underway, and his most impressive work is buried in his posts on Warseer, but great work all the same.
http://smallscaleramblings.blogspot.com/

The Magnificent Bastards:  This is an odd group of gamers, most of them are hard to put up with in person.  But don't let the name of the blog fool you or offend you, they are good gamers and do offer so many tips for all of you fantasy people out there.
http://www.youmagnificentbastards.com/

And yes below is my 9-year old neice, in her go-kart.  Raising another speed demon. 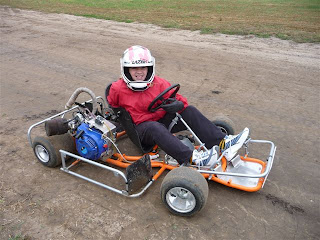