Another night in the kart...not a good showing.

Got few pics from the past couple weeks, nothing from tonight yet. And honestly tonight was not a good night for me. Had a bad draw for Heat 1 started in the back, got into with two other karts just after the green flag and spun out early before lap one was even complete. Got a restart, go a trapped low, rode around awhile, tried to get a couple a spots late and did, but got greedy trying for one more on the last lap and got hooked and spun out finished last. 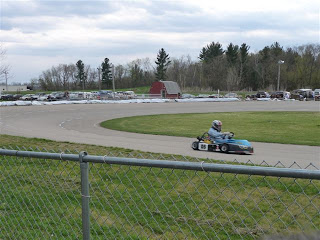 The above pic is from the first week during a warm up lap. 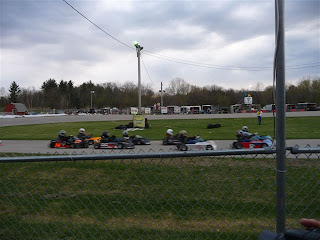 The above is the pace lap of the begining of one of the heat races.

In Heat two tonight, they inverted the field so now I'm starting outside of the pole. Got the lead by end of lap one and it went all downhill from there and finished a very disappointing fifth. Had an okay start but I had made an air pressure adjustment in the tires that did not work and lost all the handling on the kart. 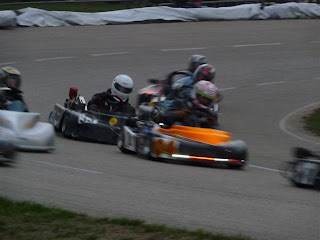 The above orange and black kart is my old man. He took third in the feature tonight, pretty good since he had nearly 30+years on all of the other competitors with the exception of me.
Got in the feature, and because of my poor heat races, I was put in the back row. Got one spot on lap one. Then two of the kart in front were fighting back in forth, I felt I was faster. After following them 2-3 laps, I decided to dive the apron a bit and see if I could get one of them, almost got both, couldn't get clear and lost the momentum for the next corner. So got back and line and waited for 3-4 laps while the leaders were getting away. The 96 finally made his move low on the 53 and it was time to go and follow him through. Away we went. I still felt faster than the 96 and diced with him a bit trying to get around him, but he was trapping low. We did this for another 3 laps or so the leaders were gone. Then coming out of turn 4, he got loose tapped his brakes, I punched his left rear and he goes into a spin. I was like I'm going to spin out unless I powerslide into his side, so I held it, side swiped him and straightened him out and then it was drag race down the straight. 96 runs a Briggs, it has more torque, he got away, I lost momentum and it took 3-4 more laps to get back to him. Finally I get around them, and got passed by the leader in a 206 Animal. After that we had 3 more laps and I was flat out getting away from those behind me. Too little too late. 5th in the Feature a lap down. 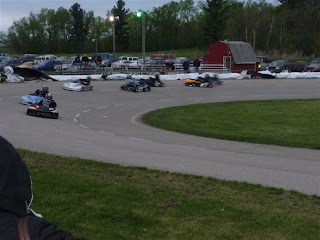 Yep the above was more like how things went for me tonight. That is me in the middle of the track going the wrong direction. I think this was from one of week ones heat races. I think I got hooked by the silver 73. He is a good hard racer and fun to compete against.