WIP On the Desk: The Saga continues...

Been busy lately with some house projects and kart projects, but I snuck in some hobby time.  Recently, I've been reading over the SAGA rules and decided to switch projects after a mental block on the greek project.  So back to the Dark Ages for awhile until I get a number of pieces ready for paint work.  I decided to go ahead and build several factions that can pull models from Viking army for fodder and I had planned to expand the Viking army anyways.

With that in mind I figured I needed some models that looked a bit less rank file like and a bit more dynamic.  And I needed some Warrior models as basically all of my Vikings are hirdmen.  So onto building and doing some minor conversion work.

Above you can see that was not limited to just Viking and Saxons, I also added a dwarf that has been on the desk for ages and two Avatars of War figures for further expansion of my Warriors of Chaos army.  On the far right is WIP of the Saxon Warlord.  In the very back are some of the warriors that I will use for the various Viking factions. 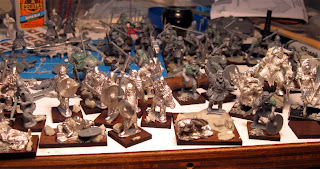 Above I had some left over metal Gripping Beasts and I recently picked up a few Foundry Vikngs.  In the middle is the model that will serve as my Viking Warlord.  I also decided against using any round bases since most of this stuff is something that I want to cross over into WAB and CoE also.  More to follow.
Posted by PsychosisPC at 11:48 AM